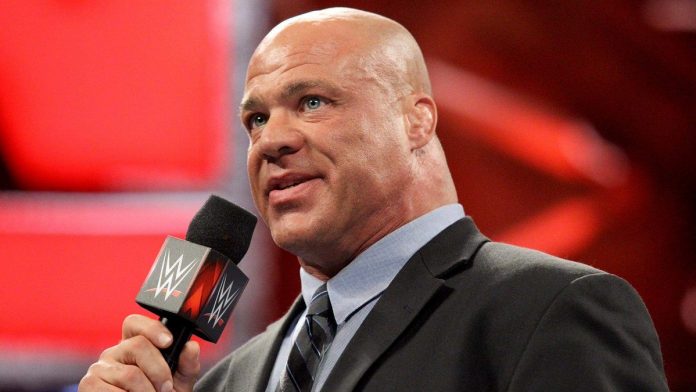 WWE legend Kurt Angle recently opened up the latest edition of The Kurt Angle Show about being hit with a banned move which was none other than the Piledriver. The Olympic gold medalist also spoke about several facts and stories from his career.

Kurt Angle comments on getting hit with Piledriver by Steve Austin

The Piledrivers have been banned from WWE with the company being concerned with head injuries of the talents. But, stars like The Undertaker and Kane have been using the reverse(Tombstone Piledriver) version of the move but safely.

The former WWE star during a special ‘Ask Kurt Anything’ session, spoke about being hit with one of the riskiest moves in the business- the Piledriver. It was more risky for him provided with the multiple neck injuries he has sustained during his entire career.

However Angle said that he had trusted Stone Cold Steve Austin with the move when the Texas Rattlesnake had executed the move during their match at Unforgiven back in 2001.

As mentioned earlier, Angle’s history of neck injuries had caused the management not to take the spot lightly, but the former WWE Champion had safely hit the move.

Austin didn’t jump before the moment of impact. and tucked his opponent’s head in between the knees to keep his opponent safe.

He said: “No, you don’t want to sign up for it. You know what? I trusted Austin. I have only done it twice in my career. I was always told not to do. I wasn’t allowed to do it, but Austin talked me into it, and I trusted him because he is a really safe worker. But I did take it with him, but Austin doesn’t jump in the air when he does it.

He added: “So, the impact, you know, he just goes from his feet and sits down. So, it’s less impact. He kept his knees bent, so my head wouldn’t hit the ground.”

Kurt Angle has been at the end of the move twice in his career. The other time was when he was in TNA.The WWE Hall of Famer reminisced being dropped with a piledriver by former WWE star Eric Young, whom he trusted equally.

Kurt Angle said: “And I did it with Eric Young in TNA once too, but I trusted those guys wholeheartedly, but that’s one thing that’s I’m not supposed to take because of my neck injuries.”

The move is banned from WWE but it is widely used in other promotions.