East vs West 3 returns in a big way and will feature the best Arm Wrestlers in the world.

Professional arm wrestling has seen a massive rise in popularity in recent years and right now, the entire community has its focus on the ongoing flagship series of events titled “King of the Table“. However, if you’re a fan of arm wrestling, you would be interested to know about another top of the line series of events that are billed as “East vs West“, featuring some of the biggest names in the sport.

East vs West 3: Bringing the two arm wrestling worlds together

Being one of the fundamental strength sports, arm wrestling has seen world champions from both the eastern and western hemispheres. The East vs West series of events- which brings the two worlds together, is the brainchild of Turkish arm wrestler and one of the greatest pullers of all time- Engin Terzi.

The first East vs West event took place on 12th June last year, followed by the second edition which was hosted on 12th February this year and both events took place in Istanbul. For its third edition, East vs West will return to the capital of Turkey on 21st May. 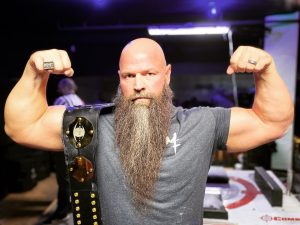 Similar to its two previous editions, East vs West 3 will once again feature some of the biggest names in arm wrestling today.

Dave Chaffee, who dominated Alex Kurdecha to a 5-1 victory in the main event of King Of The Table 3 last month, will take on Georgian pulling icon Genadi Kvikvinia at East vs West 3.

American arm wrestling legends John Brzenk and Michael Todd, both of whom made appearance at East vs West 2 will be back in action in the third edition as well. Brzenk, who defeated Khadzimurat Zoloev 3-0 at East vs West 2, will now take on Zurab Tavberidze.

Michael Todd, meanwhile, will be looking to get back to winning ways, after losing to Kvikvinia 3-0 in the second edition of the event back in February. He will now take on another Georgian star, Revaz Lutidze.

Just like its previous editions, East vs West 3 will stream live on Coresports PPV.

Over The Top Down Under results: Ryan Bowen defeats Larry Wheels