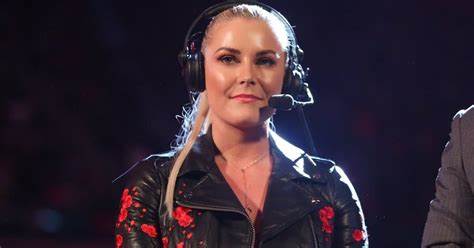 The former WWE broadcast member Renee Paquette had parted ways WWE following the SummerSlam pay-per-view back in 2020. She has kept her fans guessing where she would be working next.

She recently made an appearance on Busted Open Radio and recalled her working experience in WWE. She expressed her disappointment working with the company.

Renee Paquette was asked to shed light on the things she didn’t miss from wrestling. She explained that it wasn’t the wrestling part of the business, but the micromanaging in the production that takes place throughout WWE.

Renee Paquette said it was difficult to stay under the magnifying glass year after year while pleasing people and staying true to herself at the same time. Paquette explained:

“You think you go through it once and ‘okay, I’m safe!’ and then like, another year later or so its ‘you’re back under the microscope again.’ Trying to adapt to that and trying to be a people pleaser, while also staying true to yourself, can be a very fine line to walk. And it can be very exhausting.”

Renee Paquette opens up on her stint on RAW

Paquette further specifically spoke about her run as a commentator on Monday Night RAW. She revealed going into the work with less confidence and eventually losing more of it. She felt like leaving the company at that point of time. Renee Paquette said:

“It’s really tough because my confidence was also in the shitter at the time, so I felt like I was getting hammered from both sides.I was like ‘oh my God, why am I here? I don’t know why I’m here anymore. I feel like no one is happy with what I’m doing.’

Renee Paquette revealed though she tried to bring out the best of the situation, she could not and eventually failed due to lack of confidence.

She said: “And I’m trying my best to make the best of this situation and its a fantastic opportunity. But you go into something and already feel like your confidence is a little bit shattered, you’re not going to have a great performance.”

We will have to see where she ends up penning down a deal next.