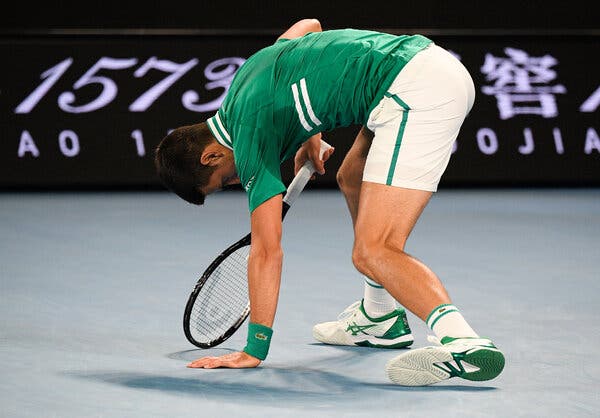 Novak Djokovic braved pain to beat Milos Raonic on Sunday to advance to the quarter-final of the ongoing Australian Open. The Serb beat Raonic 7-6 (4) 4-6 6-1 6-4 in a game that pushed the World No 1 as he did not have it easy.Novak Djokovic will take on Alexander Zverev in the quarterfinals in a game that may well sound a death knll for Novak’s title defense.

On the other hand, Rafael Nadal continued his bid for a record 21st grand slam with a convincing win over Fabio Fognini.

Novak Djokovic says it’s a “gamble” to keep playing the Australian Open and his abdominal injury could have an impact on the rest of his season, but the world number one is prepared to take the risk. The Serbian eight-time champion sustained a “muscle tear” during a thrilling five-setter against Taylor Fritz on Friday.

He didn’t train the following day but took to Rod Laver Arena Sunday evening dosed up on painkillers to see off the threat posed by big-serving Canadian Milos Raonic over four sets and make the quarter-finals.

“I mean, it’s kind of a gamble, that’s what the medical team told me. It’s really unpredictable, you can’t know what’s going to happen with you once you’re on the court,” Novak said.

“You’re not gonna save yourself or think about going for that point or this shot or that shot. It just pulls you. It’s normal. Playing at this level, you just want to give it your all.

“It could cause much more damage than it is at the moment, but also could go in a good direction.”

Djokovic has yet again not come to practice on Monday instead of taking a rest ahead of his anticipated match against Zverev.

Rafael Nadal looks to be peaking at the right time after brushing aside Fabio Fognini to reach the quarter-finals of the Australian Open.

Fognini came from two sets down to beat Nadal at the US Open in 2015 but, after failing to convert a lead in the second set, he swiftly succumbed to a 6-3, 6-4, 6-2 defeat. Nadal, who is bidding to win a record 21st grand slam title, has not dropped a set at a slam since losing in the quarter-finals in Melbourne last year to Dominic Thiem.

Previous article
Formula 1 CEO Stefano Domenicali is hoping to get spectators back at the earliest
Next article
Ryan García is no easy opponent, says Manny Pacquiao’s trainer