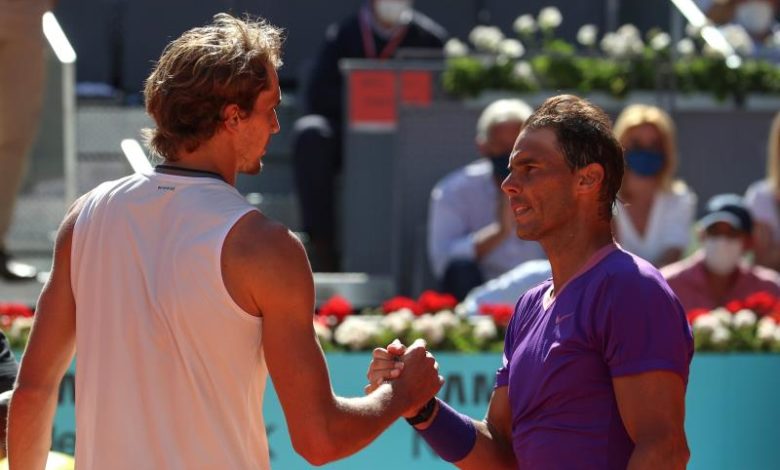 Is it Zverev’s excellent shot-making? Is it his towering 6 and a half feet frame? Is it his impeccable stamina? Or is it just a mental block?

Whatever may the real reason be, Rafa has succumbed to Alexander Zverev for the third consecutive time as the young German ousted the veteran Spanish in straight sets 6-4,6-4 to earn a quarterfinal meeting with Dominic Thiem. The defeat also marks another chapter in Nadal’s uncharacteristically irregular clay season 2021. Zverev on the other hand would be hoping to add to his solitary championship win in 2018.

In the other quarterfinal, Dominic Thiem overcame the challenge of big-serving John Isner 3-6,6-3,6-4 to inch closer to his maiden title in Madrid.

Rafa taking a step back?

Earlier, Nadal played with consistent depth to extract Zverev errors and gain the first break of the match at 3-2, but Zverev responded immediately to claim four straight games and the opening set.

The German caught Rafa out at the net with back-to-back passing shots at 4-2 and, two games later, he used his cross-court forehand to drag Nadal out of position and gain the decisive break.

Also read:French Open 2021-A limit of 1000 fans to be imposed in Rolland Garros

Zverev continued to pile the pressure on the top seed’s serve in the second set. Nadal was able to escape danger at 1-1 with an inspired drop shot, but Zverev stepped inside the baseline and dictated with his forehand to convert his next chance at 2-2.

The World No. 6 maintained his advantage on serve and converted his first match point when Rafa fired a crosscourt forehand into the net.

“I feel like I’ve been taking steps forward, but when you go up a ladder, you can take a step back and I think that’s the way it has been today. Things started the same as in the previous games but, at the moment of truth in the moments in which I had to define the set, I did everything wrong making several mistakes,” said Rafael Nadal in the interview.

Zverev on the other hand seemed absolutely thrilled after a hattrick of wins against the Spanish legend.

“[It is] definitely one of the biggest wins of my career so far, especially on clay against Rafa. It is the toughest thing to do in our sport,” Zverev said in his post-match interview. “Beating him in his house, in Spain, is incredible but the tournament is not over yet.”

The stage is set for the semis-

Matteo Berebtinni bested C. Garin in the last quarterfinal 5-7,6-3,6-0 to complete the SF lineup and set up a last four meeting with Casper Ruud.

However,it is the other semifinal that is expected to be the more blockbuster one as World Number 4 Dominic Thiem takes on World number 6 Zverev, in a repeat of the 2018 championship match.

The two have had many memorable battles with the most famous being US Open 2020 finals in which Thiem rallied from two sets down to clinch his maiden grand slam.

“I know that I can do it [against Dominic],” Zverev said. “Everyone remembers the US Open final that we played. I remember it certainly and it is still going to be in the back of my mind when we play tomorrow. I am looking forward to the match.