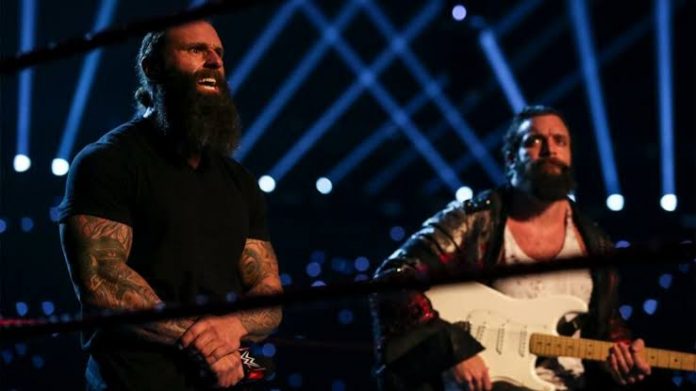 Jaxson Ryker, the WWE star who previously appeared on SmackDown, made his debut on the red brand on the latest edition of Monday Night Raw alongside Elias.

The newest edition of Monday Night Raw saw a segment where Elias made his return to red brand after being out of action as he was ‘electrocuted’ by Jeff Hardy. He talked about having visions of Ryker.

Elias was paired with Jaxson Ryker on an episode of WWE Main Event and the latter made his official debut on Raw this week.

After Ryker was introduced by Elias, he went onto describe how Elias’ music has changed him and talked about being re-born by the ‘Universal Truth’ song.

He said Elias is a visionary and he will stop the assaults on Elias which have been going on for quite some time.

Elias almost started with his song for the night was soon interrupted by the WWE 24/7 Champion, R-Truth.

He explained that his intention was not to interrupt but trouble began when stars from the locker room such as Gran Metalik, Akira Tozawa, Drew Gulak raced to the ring to chase Truth.

Jaxson Ryker rose to the occasion as he showcased his strength. He hit Metalik with a huge clothesline, then Tozawa who was rolled into the ring was thrown back outside onto others and cleared the ring in the process. He then chokeslammed Metalik to end the segment.

He was previously a member of The Forgotten Sons alongside Wesley Blake and Steve Cutler and performed on WWE Friday Night SmackDown.

Then the stable was pushed for the tag-team titles. But, Ryker was pulled out of action after he made some controversial pro-Trump remarks.

Recently, Wesley Blake and Steve Cutler were introduced as King Corbin’s new associates on SmackDown and as mentioned Ryker to be a part of the red brand from now on.

During the Raw Talk, Ryker said, “I think we made that perfectly clear on Raw. This man, for a long time, has been disrespected. He’s been attacked, he’s been interrupted. I’m here to make sure that doesn’t happen again.”

He explained, “You see, I was once lost, but now I am found. This man sung ‘Amazing Grace’ and spoke to me. I was re-born by this man, by his music. It inspired me and that’s why I decided to walk with Elias.”