Illia Izman, a professional arm wrestler from Ukraine and one of the most popular names in the European arm wrestling scene, has lost his life in the country’s ongoing war against the Russian invasion.

Since Russia launched its military operation into Ukraine, several athletes from the country have taken up arms and joined the defense forces in tackling the invasion. We have seen examples of Ukrainian boxing icons such as the Klitschko brothers, Vasyl Lomachenko and Oleksandr Usyk joining the resistance.

However, one of the most unfortunate incidents out of the conflict has been the recent death of Illia Izman, who was one of those Ukrainian athletes who donned the olive drab and took up arms against Russia.

A super heavyweight contender, Izman won the Kyiv Open Cup in 2020 August in the left hand category. He maintained a YouTube channel named ‘IZMAN PRO’ as well as an Instagram account. Izman has a young daughter and would often post photos and videos on his Instagram, as well as his wartime photos.

As the arm wrestling community mourns the sad demise of Izman, Alex Kurdecha also took to his Instagram to pay tribute to Izman.

“Rest In Peace” Kurdecha wrote, along with a photo of the two. 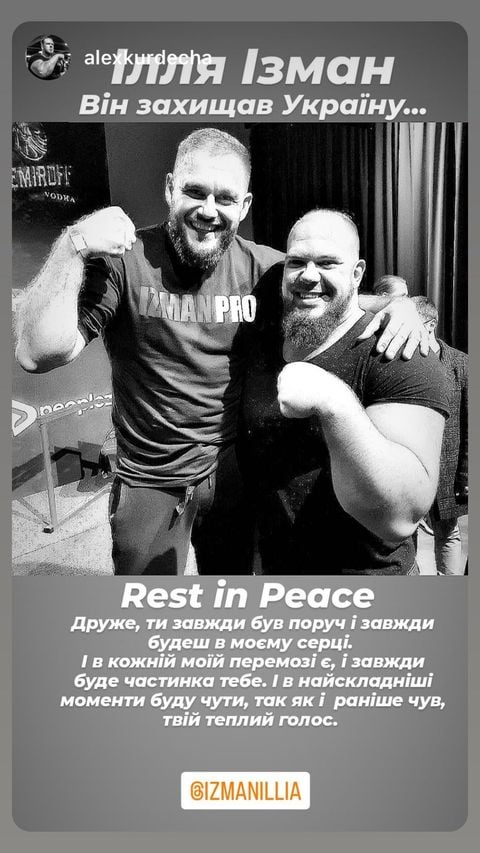 Previous articleTop teams who won’t be playing at the World Cup 2022
Next articleBob Arum Believes Isaac Cruz vs. Shakur Stevenson Will NOT Happen