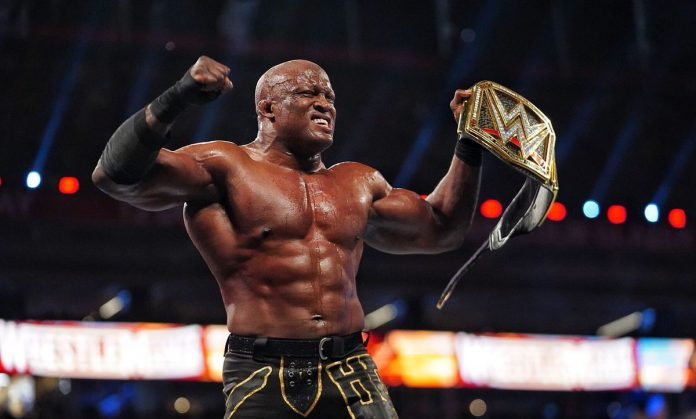 WWE Champion Bobby Lashley decimated his challenger Kofi Kingston at recently concluded Money In The Bank pay-per-view. He has become a dominant force which certainly proves from his performance at the event as Kingston lasted only seven minutes.

Now, he seems to march on for upcoming pay-per-view next month, SummerSlam. But, he seems to have confirmed his potential opponent for ‘The Biggest Party of the Summer’.

With the fans back in attendance, WWE already made some surprising decisions and also saw the return of John Cena at Money In The Bank pay-per-view. They are ready to build up the upcoming SummerSlam event and it was previously confirmed huge surprises are also lined up for the show.

There have been reports of the return of former WWE Universal Champion Goldberg. He could be back soon and set his sight on Bobby Lashley’s WWE title. The All Mighty could well be colliding with Goldberg at SummerSlam and that could the Hall of Famer’s fourth straight title match.

Bobby Lashley took to his Twitter account and dropped a cryptic Tweet which has led to the fans wondering about a possible return of Goldberg. Lashley reference Goldberg’s famous saying, ‘You are next’ and questioned, ‘Who’s next?’

The WWE Hall of Famer Goldberg had previously won the Universal Championship from ‘The Fiend’ Bray Wyatt at Super ShowDown 2020 and dropped it to Braun Strowman at WrestleMania 36.

He made his return on RAW earlier this year and challenged Drew McIntyre for the WWE Championship at Royal Rumble but could not successfully challenge.

The former WCW star seems to a have a huge deal and he is contracted for a couple of matches per year. His previous appearance was at Royal Rumble pay-per-view as mentioned earlier and the second one could be at SummerSlam.

Many fans had been expected a dream match between Bobby Lashley and Brock Lesnar but instead they are disappointed with the potential return of Goldberg and challenging for the WWE title. We will see how WWE plans Bobby Lashley’s reign as the WWE Champion.