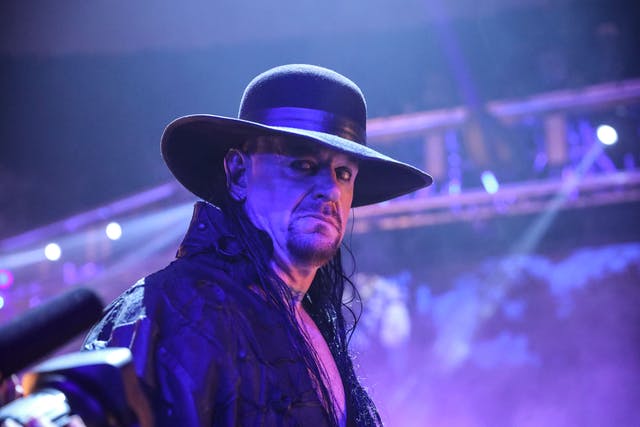 The Undertaker, the wrestling legend has bid adieu to the WWE Universe at Survivor Series pay-per-view. The event saw the Final Farewell of The Phenom as well as commemorated his 30 years Anniversary of working in the company.

Sunday’s Survivor Series pay-per-view was a special edition as ‘The Deadman’ had also made his debut in WWE at the same event on November 22, back in 1990. He was revealed as the mystery member of Million Dollar Team which was led by WWE Hall of Famer ‘The Million Dollar Man’, Ted DiBiase in the traditional 5-on-5 Survivor Series match.

This year’s Survivor Series celebrated The Undertaker’s 30th Anniversary in WWE but it was an emotional one as the event also saw his Final Farewell. Several stars and wrestling icons had turned up to make the event more special.

Many WWE stars from past and present including The Rock, Ric Flair, John Cena paid tribute to The Phenom on Twitter and thanked Taker for his contribution to the industry and WWE.

Still floored by the experience and reaction to the #BoneyardMatch at #WrestleMania.
If it was the last time @undertaker laced up his boots, I’m honored it was against me. #TheLastRide https://t.co/qzofoKEn2Q

After three decades of @undertaker committing wholeheartedly to the @WWE, tonight we bear witness to the end of an extraordinary body of work. For all the in ring moments and as a member of the @WWEUniverse, I say #ThankYouTaker! #SurvivorSeries #Undertaker30

The measuring stick. The locker room leader. The Phenom. Three decades ago today, @Undertaker changed the landscape of sports-entertainment. His legacy is incomparable, his impact immeasurable. #ThankYouTaker. #Undertaker30 pic.twitter.com/TWm1Ihww8U

Tonight I am very proud to be celebrating one of the greatest careers in @WWE history. A singular talent, a true leader, and a great friend. #ThankYouTaker #SurvivorSeries @undertaker

We’ve faced each other in every type of match and created some of the most special moments in my career. Standing across the ring from @undertaker was always a daunting experience but I’m excited to hear the gong toll one last time. #FarewellTaker #SurvivorSeries

Paul Bearer, Taker, Me, Julie & Bret Hart, & Tatanka in Singapore at the HardRock Café. 1994
Incredible memories. The time has flown by so fast. #ThankYouTaker pic.twitter.com/osQY0sg2cm

Little throwback to a @undertaker themed photoshoot we did for @WWE what a legendary career he has had. The best entrance of all time. Hands down. #FarewellTaker #30YearsOfUndertaker #ThankYouTaker pic.twitter.com/H47PmTmINF

Without @undertaker There would be no Murderhawk.
You took the time in a gym in Austin TX nearly 20yrs ago to talk to and give advice to an aspiring kid who hadn’t done jack in the biz yet. Your words resonated with me & kept me going forward! #ThankYouTaker

So many emotions. Thank you for inspiring me to follow my dream. Thank you! @undertaker ⚰ ⚱ #FarewellTaker #ThankYouTaker #Undertaker30 #LiveForever pic.twitter.com/IrKjNTLfSy

UNDERTAKER BUBBA YOU WORK ON TOP LONGER THAN ANYONE. EVEN THE BRUNO. YOU FOREVER THE REAL. I REMEMBER YOU AS YOUNG KID IN THE ATLANTA IT MAKE US ALL PROUD TO SEE YOUR BEAUTIFUL CAREER. I DRINK COLD BEER AND MAKE CHEERS FOR THE DEADMAN! #thankyoutaker pic.twitter.com/VLG2fOBjQ2

Congratulations to @Undertaker on a remarkable 30-year wrestling career with @WWE. Here’s a rendition of the original in-ring introduction I did at 1990 Survivor Series, the night Undertaker debuted in the WWE, as my mystery partner. Spoiler alert?? Ha ha ha ha ha #ThankYouTaker pic.twitter.com/YO7HxQx0u0

— Something to Wrestle with Bruce Prichard (@PrichardShow) November 23, 2020

30yrs ago today, he made his iconic #SurvivorSeries debut.
Like EVERYONE – I was in awe as a rookie in the @WWE when his first words pierced my soul as he walked in the dressing room and said, “Muthafucka” True story 😂
Honored to share the ring w you, my brother. #ThankYouTaker pic.twitter.com/ULlppOQlCa

Congratulations To The One And Only @undertaker! I Can’t Say How Much You Meant To Me Personally. With A Career So Extraordinary, You Deserve The Greatest Farewell Of All! WOOOOO! pic.twitter.com/rJx6WksCt2

Happy 30th to #TheFonz of @wwe! There are none cooler…. @undertaker #Undertaker30 @ Death Valley https://t.co/Q6DugvbVx3