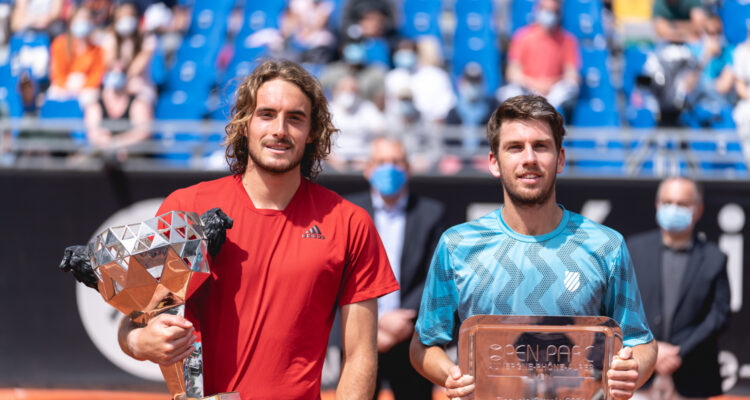 World number 5 Stefanos Tsitsipas brushed aside Cameron Norrie in straight sets 6-3,6-3 to claim his 2nd title on clay this season and strengthen his claim to get the Rolland Garros out of the clutches of King Of Clay.

Earlier in the semis,Tsitsipas had to see off the imperious challenge of Italian teenager Lorenzo Musetti,against whom he had to go to 3 sets after losing the opening set.Tsitsipas had needed to step up his game to get the 4-6, 6-3, 6-0 win and book his place in the final. For the first part of the match, Musetti threw the World No. 5 off his rhythm with a balance of aggression and drop shots but ran out of steam.

But the finals against Norrie was a rather mundane win for the Greek, with the match lasting a mere 69 minutes.

Tsitsipas extends his lead over Rublev in race to Turin-

The 22-year-old, who won his first ATP Masters 1000 event at the Rolex Monte-Carlo Masters in April, has now claimed a Tour-leading 33 wins this year, four ahead of Andrey Rublev (29). Tsitsipas has now won seven ATP Tour titles in his career with his victory over Norrie. He extended his lead in the FedEx ATP Race To Turin while also cementing his position as one of the favourites for Roland Garros.

In a lively start to the finale, both players fended off break points in their opening service games as Tsitsipas looked to move up the court and dictate the play with his heavy forehand while Norrie aimed to hug the baseline and target the Greek’s backhand.

Having made 69 percent of his first serves in the opening set, Tsitsipas was able to close it out with one of the seven aces he hit in the match.

Tsitsipas continued to apply pressure on Norrie at the start of the second set, moving well and hitting with great depth. Although Norrie managed to temporarily fend off the danger and hold onto his serve, Tsitsipas started to force errors out of the World No. 49 and broke to lead 4-3.

The Greek broke Norrie’s serve a final time to seal the win after an hour and nine minutes with his focus now turning to Roland Garros.

“Proud of my performance”-

Speaking in the post match interview,Tsitsipas appeared visibly delighted after yet another win.

“I felt in good shape from the beginning of the tournament. I am proud of today’s match, I knew it would be a difficult one against Cameron who has been showing great tennis this week,” Tsitsipas said on court.

Speaking about his French open preparations, the Greek said –“It is about getting there as early as possible, starting to practise and getting in shape for the big Parisian Grand Slam, which I adore and love and hopefully something good can come from it.”