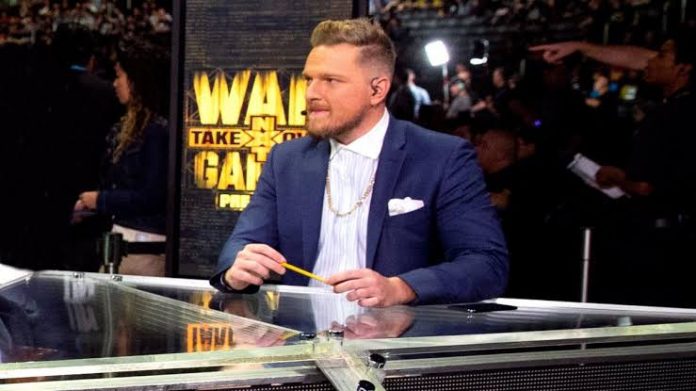 Ex NFL punter, Pat McAfee who worked on WWE’s NXT brand has been reportedly pulled out of the programming.

Pat McAfee, the former sports analyst who made his mark on WWE’s NXT brand recently would be reportedly off the WWE screen. The former NFL player was highly praised after he made his debut on the gold and black brand.

Dave Meltzer of Wrestling Observer Newsletter has reported that McAfee would be off for indefinite period of time. Possible time of his return is expected to be sometime around the spring.

Meltzer had reported: “We’re told McAfee will be off TV for a while. It was WWE’s call, not his. No exact time frame was said, but we’re told he was given the impression it’ll be the spring.”

In the world of NFL, he spent eight seasons playing for Indianapolis Colts, the place where he retired from the sports. Rumours started floating that he would come out of retirement to join Pittsburgh Steelers but took his career to a different direction, working as a podcaster having his show, The Pat McAfee Show and worked as sports analyst as well.

In 2018, he opt to join the world of pro wrestling and was introduced on NXT in a show in Indianapolis, also interfering in a match between Adam Cole and Aleister Black.

He had worked as pre-show analyst on NXT TakeOver events and officially penned down a multi-year contract with WWE. His first major involvement with the NXT brand came when the brand had invaded the main rosters- Raw and SmackDown.

He had eventually turned heel and joined forces with Danny Burch and Oney Lorcan, helping them win the tag-team golds and finally recruiting Pete Dunne to the stable.

They had collided against the The Undisputed Era recently at NXT WarGames event in a losing effort as well and it was the last time McAfee was witnessed on WWE screen.

His mic skills and in-ring abilities have been lauded by WWE legend, Steve Austin and former WWE star, CM Punk. It is to be seen when he returns and what the WWE has in store for him in the future.