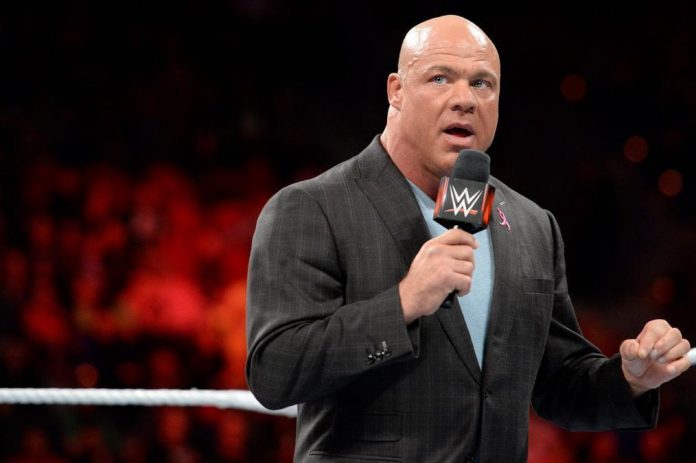 WWE Hall of Famer Kurt Angle seems to keep an eye on the happenings in the world of MMA, specially UFC. The promotion’s lightweight fighter Conor McGregor’s highly-anticipated trilogy fight against Dustin Poirier at UFC 264 ended in a misery.

‘The Notorious One’ had sustained a horrendous leg injury near the end of the opening round and the referee awarded a a TKO victory to The Diamond.

Kurt Angle is very popular for completing his Olympic match with a ‘broken freakin’ neck’ that earned him The Olympic Gold Medal. This had played a major role in his gimmick while his time in WWE.

The Hall of Famer seems to have quite a casual approach towards the injury of Conor McGregor, who suffered a broken tibia.

The Olympic Hero sent out a Tweet to remind everyone that he won the Gold Medal at the Olympics with a “broken freakin neck,” but Conor couldn’t finish the fight. According to Kurt Angle it is not a big of a deal that everyone is making out of it.

Kurt Angle wrote: “So…. @TheNotoriousMMA broke his freakin’ ankle this past weekend. Big deal. I break my ankle all of the time. I broke my ankle this morning and I’m jumping around right now!! I even won a gold medal with a broken freakin neck too.”

Conor McGregor will be out for several months

The fight did not go the way McGregor had imagined. Following his fight with Poirier, The Irishman was down on the mat and went on to threaten to murder Dustin Poirier and his wife Jolie in their sleep.

He had been trash talking about Poirier’s family for quite some time and that idea has been even lambasted by UFC President Dana White.

Dana White had confirmed in the post-show press conference that McGregor suffered a broken tibia and he underwent surgery the next day. He is likely to miss the remainder of the 2021 campaign and will not be back to the octagon any time soon.

The talks of a fourth fight between Conor McGregor and Dustin Poirier is currently underway and we will have to see if it takes place when The Irishman makes his return.