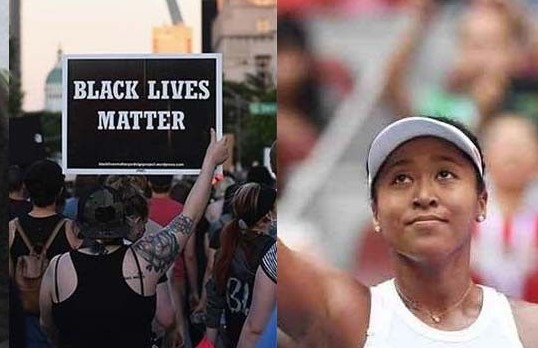 The entire “black lives matter” has taken the world by storm and the latest news comes from Naomi Osaka who has pulled out of her semi-final encounter in WTA Western and Southern Open, which was scheduled in New York on 27 August.

The worldwide movement which was triggered by George Floyd’s unfortunate death has engulfed the sporting arena too and the entire Naomi Osaka episode is the latest in a series of gestures done by sportsmen to show their solidarity with the movement.

The current world no. 10 tweeted about her decision to withdraw from the fixture via now-viral tweet.

The entire episode began with the brutal death of George Floyd at the hands of police and George’s last words of “I can’t breathe” as a policeman tried to hold him by kneeling on his neck, made the entire world realize the aggravating racial abuse situations that exist even in 21st century.

The final straw in the coffin was shooting of Jacob Blake, an African -American at the hands of a policeman.

The sporting community too has been extremely vocal about this entire issue and the last few days, in particular, have been marked by high profile players putting their two cents on the sensitive topic. It began with Milwaukee Bucks staging an unprecedented boycott and before long the entire NBA and even stars like Lebron James expressed their solidarity for the movement.

Naomi Osaka’s  withdrawal is the latest effort from the sporting community to bring home the point that this is an issue far more important than a single match or tournament and Osaka herself stated as much.

“Before I am an athlete, I am a black woman. And as a black woman I feel as though there are much more important matters at hand that need immediate attention, rather than watching me play tennis,” Osaka posted in a statement on Twitter.

“I don’t expect anything drastic to happen with me not playing, but if I can get a conversation started in a majority white sport I consider that a step in the right direction,” she added.

This is not the first time that Osaka has expressed her support for “Black Lives matter.”

Earlier, in June, too she had expressed her concern over the increasing racial crimes around the world.

She had said that the voices of prominent athletes can be more influential than those of politicians and is determined that hers will be heard on the subject of racial injustice.

The Tennis community stands with Osaka-

The WTA, USTA, and ATP too have come in support of the movement and issued a joint statement expressing their solidarity with the movement.

“The USTA, ATP Tour, and WTA have decided to recognize this moment in time by pausing tournament play at the Western & Southern Open on Thursday, August 27. Play will resume on Friday, August 28.” the statement read.

Andy Murray and Milos Raonic, among others, too expressed admiration for her courage to stand for what is right.

Andy Murray  gave 3 “thumbs-up” on social media while after winning the quarters, Raonic released the following comment about the NBA boycott saying:

“I think it’s the right next step because things do need to change. We’re all humans, we’re all equal, but we’re definitely not being treated that way. That’s tragic, unfair, and unacceptable.”

Talking about Naomi’s decision not to play the semifinal, he added:

Roger Federer’s swan song-End of the road or miles to go for the Swiss maestro?

“You suck”: Naomi Osaka brought to tears by a heckler during match at Indian Wells