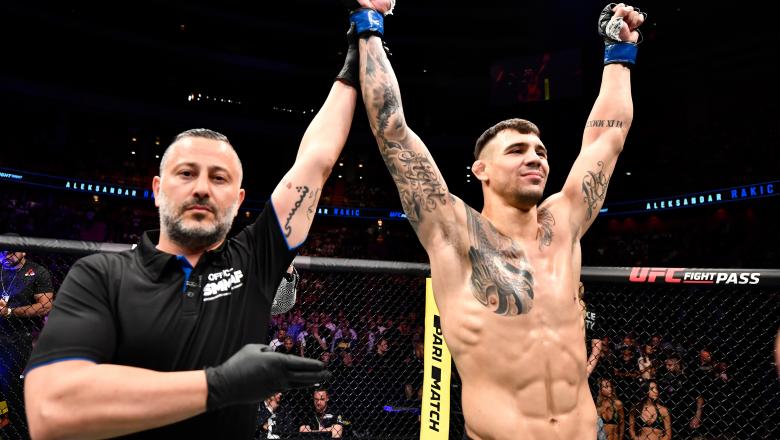 Aleksandar Rakić  is an Austrian mixed martial artist of Serbian heritage currently competing in the Light Heavyweight division of the Ultimate Fighting Championship (UFC). A professional since 2011, he has also competed for the Final Fight Championship in Austria. As of August 10, 2020, he is #8 in the UFC light heavyweight rankings.

He started competing in kickboxing and boxing when he was 14 years old and has fought over 40 fights prior to transitioning into MMA when he was at the age of 19 as he wanted to incorporate grappling and wrestling in his game. His fighting style is freestyle.

The Austrian made his UFC debut on September 2, 2017 against Francimar Barroso at UFC Fight Night 115 in Rotterdam, Netherlands.He won the fight via unanimous decision (30–27, 30–27, and 30–27). On February 17, 2020, Rakić announced on his social media that he has signed a new, six-fight contract with the UFC.

The UFC announced a light-heavyweight matchup between Anthony Smith and Aleksandar Rakic headlining UFC Vegas 8 on Aug. 29 in Las Vegas. He moved up the ranks with four straight wins including an impressive knockout of Jimi Manuwa. He ran out of steam in his previous fight, however, losing a split decision to one-time title challenger Volkan Oezdemir.

The Austrian has a 12-2-0 record in Pro MMA and faced a narrow loss recently to Volkan Oezdemir. His only other loss was in 2011.

He is an Austrian MMA fighter, born in Vienna, but of Serbian origin. He is 28 years old and is born on 6th Ferbruary 1992.

“I am proud of what I am. I live in Austria, I fight under the Austrian flag, simply because I grew up there, Austria gave me everything, that is why I sit here and talk about future and career. But I’m proud of what I am. There are always people who think that I am an Austrian, I go to Bosnia, Serbia, Croatia, I talk with people …”

“You are Austrian, you are this, you are that” … In Austria, a different story. “You are a Serb, you are a Bosniak” Wherever I go, I am a foreigner. I can’t be home anywhere! But you know what, whoever wants to accept it is going to accept it, who will not, they don’t have to. I know what I am, I respect myself, I respect the others. “, he said about his ethnicity.

He boasts a following of 117,000 on Instagram and is socially active on social media platforms.