Manchester United are speculated to have opened talks with the La Liga club over the possibility of acquiring Ousmane Dembele on a potential loan deal. The Red Devils are not interested in a permanent deal while Barcelona prefers to sell the young winger altogether.

Having entered the final week of the transfer window with only one signing, Manchester United are facing pressure from their rivals and fans to improve their squad before time runs out. With the club’s drawn-out pursuit for long-term target Jadon Sancho reaching an impasse, they have opted to look for other options to spur up their attack.

The player has shown no interest in leaving the club after already having turned down offers from European heavyweights Liverpool and Juventus earlier this summer. Barcelona aims to offload Dembele to free up funds for Ronald Koeman who aims to bring Memphis Depay to Camp Nou.

In an instance where the loan deal is successful, Manchester United would be obligated to pay Dembele’s wages in its entirety or potentially include an option to buy in the deal.

Ronald Koeman had earlier commented on Dembele’s current situation with Barcelona at the moment.

‘He was very good in the first weeks [of pre-season] but he had a downturn last week. He trained well today and I’m counting on him. But these are decisions for the club and the player.”, Koeman said

Dembele has only managed to make his mark in patches following his big-money move to Barcelona from Borussia Dortmund. The 23-year-old has made 51 league starts since his switch to La Liga and has mostly spent his stint on the sidelines. 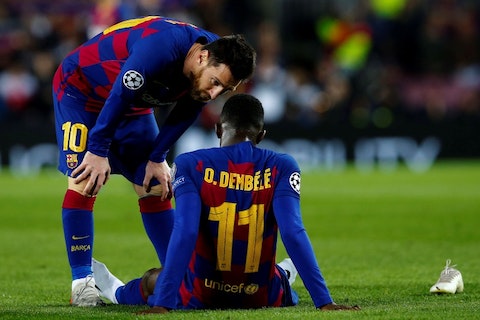 With time running out, Manchester United have made a number of enquiries in order to boost their squad which will play in the Champions League this season alongside 3 other competitions.

While the deal for Sancho is still not off the table, the team are looking into other options which include Ousmane Dembele and Watford’s Ismaila Sarr.

The Red Devils are also looking to rope in Edinson Cavani or Luka Jovic to provide more competition to Anthony Martial in the No.9 spot. They are also currently in talks to rope in left-back Alex Telles from FC Porto.