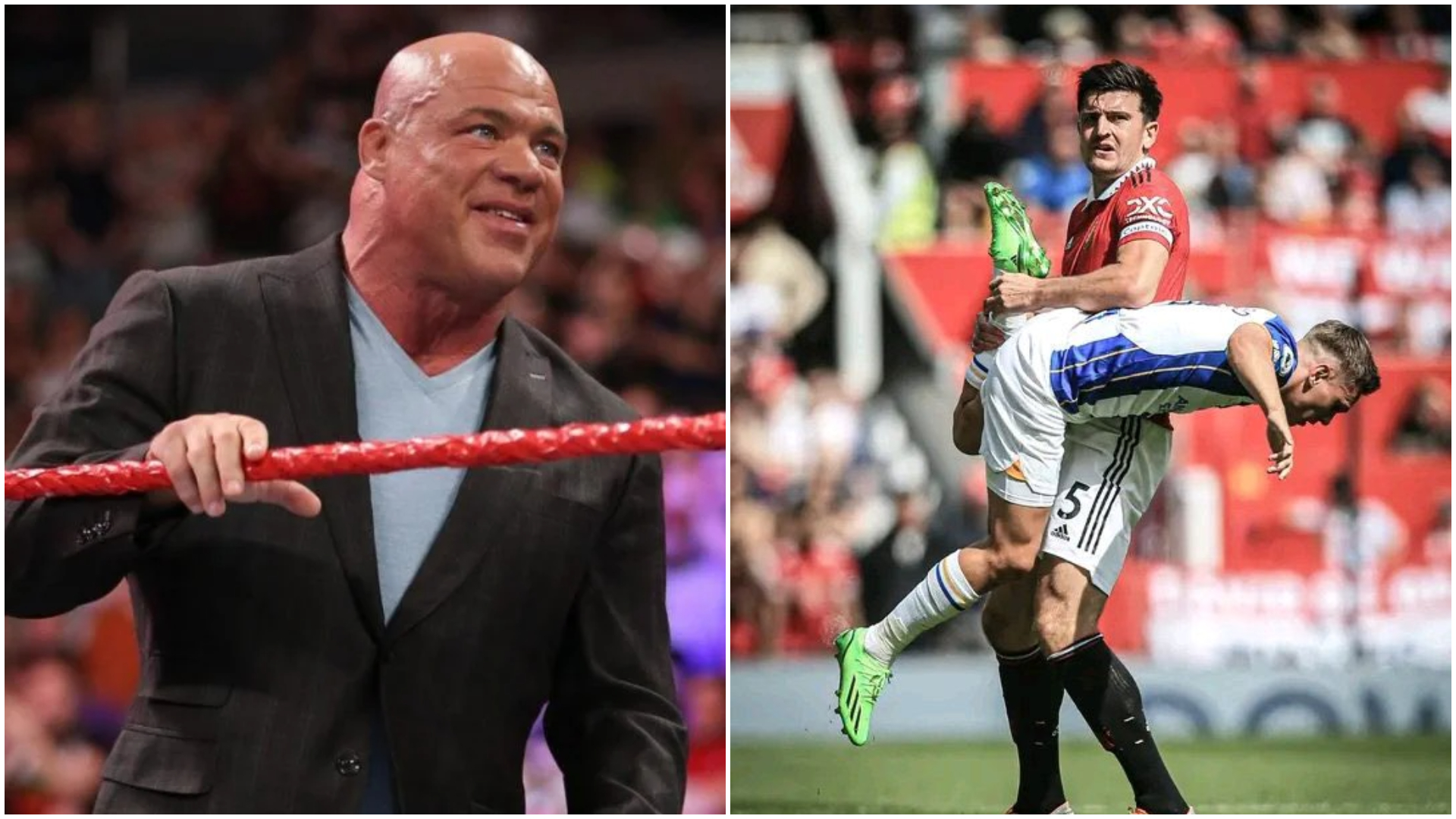 WWE Hall of Famer Kurt Angle recently noted an amusing picture of Manchester United skipper Harry Maguire. The moment captured in a picture saw the English defender apparently having a Brighton and Hove Albion player in an ‘Angle Lock,’ the ankle-lock submission move that Kurt Angle has used significantly during his legendary career.

Kurt Angle responds to the moment

The ‘Angle Lock’ submission has earned Kurt Angle numerous titles during his in-ring career. ‘The Olympic Gold Medalist’ recently came across the Tweet in which Harry Maguire seemingly had a Brighton player in a submission hold.

Angle wrote, “This is what happens when you drink whole milk and eat Snx-Smart Protein Bites @physicallyfitnu #itstrue“

One of the fans replied, “This is embarrassing for United. It even reached Kurt Angle.”

Another fan wrote, “Harry Maguire is a social experiment”

Check it out below:

Kurt Angle is currently retired from the in-ring competition. Meanwhile, Manchester United started their 2022/23 Premier League campaign on a disappointing note. The Red Devils endured a miserable loss to Brighton in the season opener.

The lackluster defense cost Manchester United a 2-1 defeat at Old Trafford as Erik Ten Hag’s reign as the boss begins with a defeat. Graham Potter’s side propelled into a 2-0 lead courtesy of a first-half brace from Pascal Gross and were unfortunate not to have a penalty when Martinez ran into Danny Welbeck after the break.

Alexis Mac Allister’s own goal halved United’s deficit, but they failed to equalise. It was a poor performance from the hosts, with the superstar Cristiano Ronaldo starting the game from the bench. The forward came on in the second half but made little impact.

Captain Maguire and Martinez were perhaps fortunate to get the nod ahead of Ten Hag’s other defensive options. Fellow centre-back Raphael Varane was left on the bench, while Victor Lindelof, Eric Bailly and Phil Jones didn’t make the 20-man squad.

“We went into the game positive, we had a good pre-season and it was the worst possible start to be 2-0 down at half-time at Old Trafford,” Maguire told Sky Sports at full-time. “We got a goal back but we huffed and puffed a bit and it’s a bad start for us.

“We started pretty well and on the front foot and as a team we had control. Then we conceded the first goal and that knocked us badly. We need to look at not letting that first goal set us back as much as it did. It was a nightmare start to be 2-0 down at half-time.”