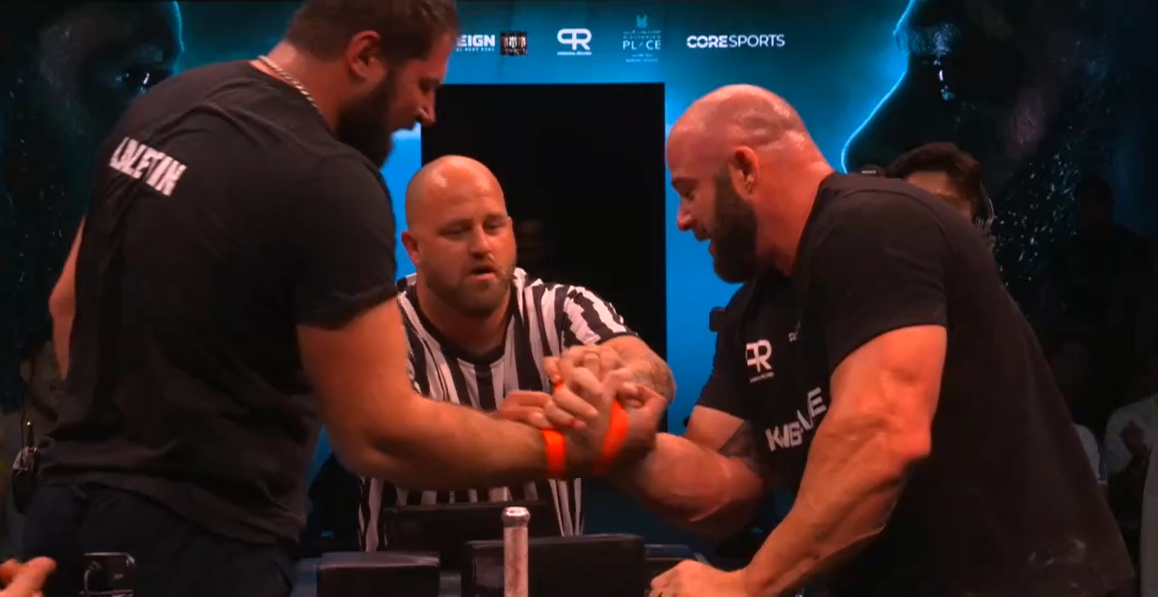 King of the Table, the premium arm wrestling event series is all set to return with its fifth installment- King of the Table 5, taking place this Saturday the 1st of October at the Millennium Place Barsha Heights Hotel in Dubai, United Arab Emirates.

So far, there already has been two King of the Table events this year- KOTT 3 and KOTT 4, on 2nd April and 25th June respectively. Both events featured mouth watering matchups and had a massive reception from all corners of the global arm wrestling community. Now, the fifth edition of KOTT is on its way and will come with another star studded lineup, headlined by a super match between Vitaly Laletin and Dave Chaffee.

The first match of the night took place between strength sports prodigy Khaled Jashell and Russian arm wrestler Aleksandr Beziazykov aka “Schoolboy”. Khaled overpowered Schoolboy in the first round after Schoolboy attempted a top roll, but Khaled caught and pressed him to take the lead. Schoolboy evened the odds in the second round after an illegal defensive move from Khaled while attempting King’s Move. The Cameroonian showed his brutal strength in round three, with a brutal and quick pin on his opponent to make it 2-1. 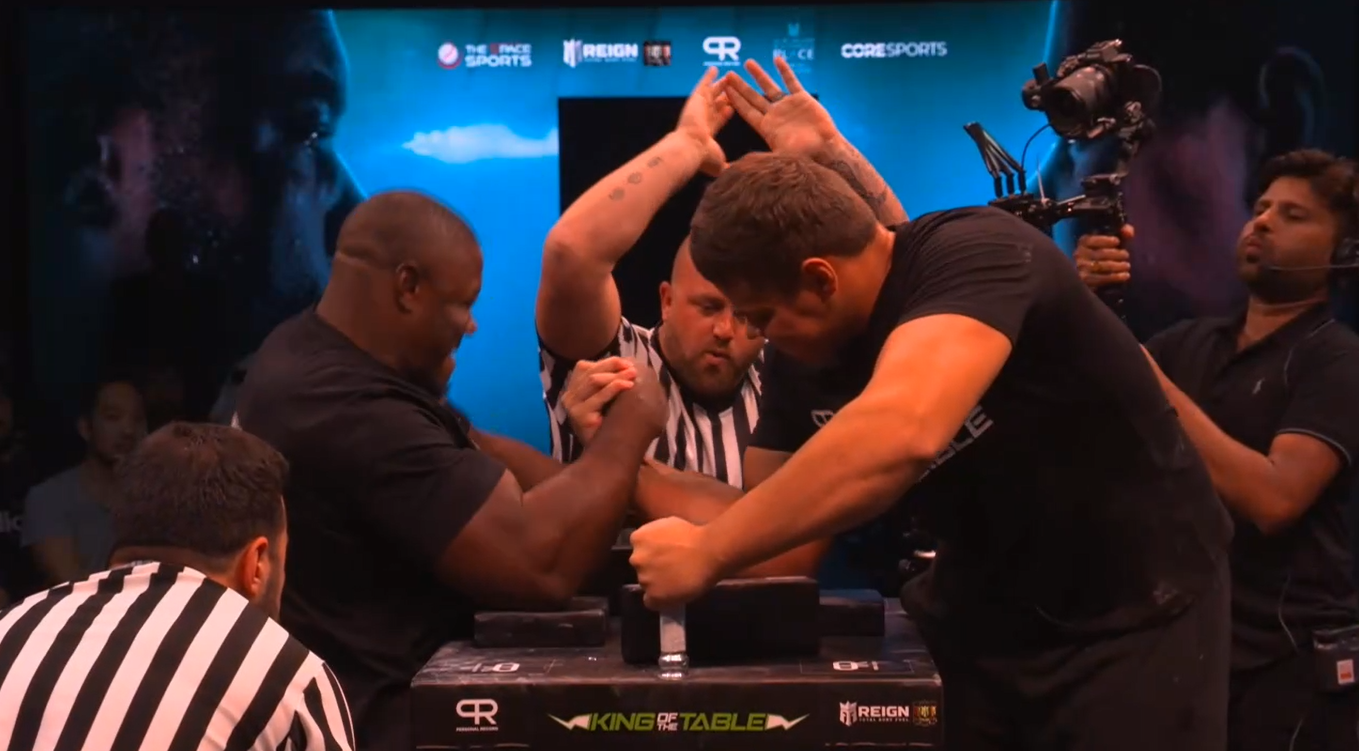 The fourth round saw Khaled committing a running foul while attempting another King’s Move on Schoolboy. Following a tensed pulling attempt from both, the straps came on for the first time, but it was Khaled’s round once again as he pinned Schoolboy with sheer side pressure. The fifth round of the match saw another overpowering pin from Khaled, who secured a 4-1 victory.

Up next were Aussie arm wrestler Lachlan Adair versus Georgian superstar Irakli Zirakashvili. The straps came on right at the start, and it was Zirakashvili scoring the first pin of the match. The second round followed suit the exact same way and the Georgian was up by 2-0. 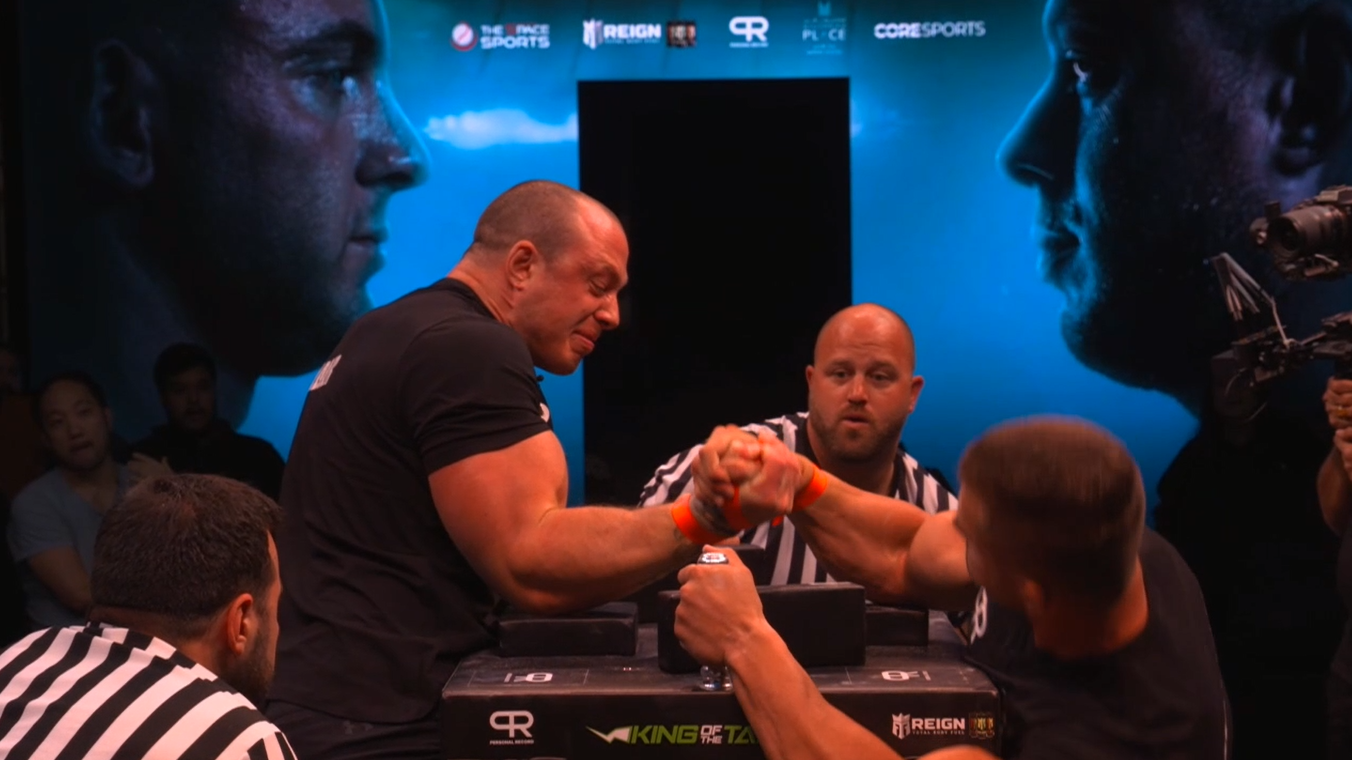 The third match of the night was a left arm clash between Davit Dadikyan and Artyom Morozov. The first round saw Dadikyan taking the lead, but committed an elbow foul while attempting a top roll in the second. Nonetheless, Dadikyan took control and made it 2-0. The Armenian kept his domination into the third round and made another pin on Morozov. 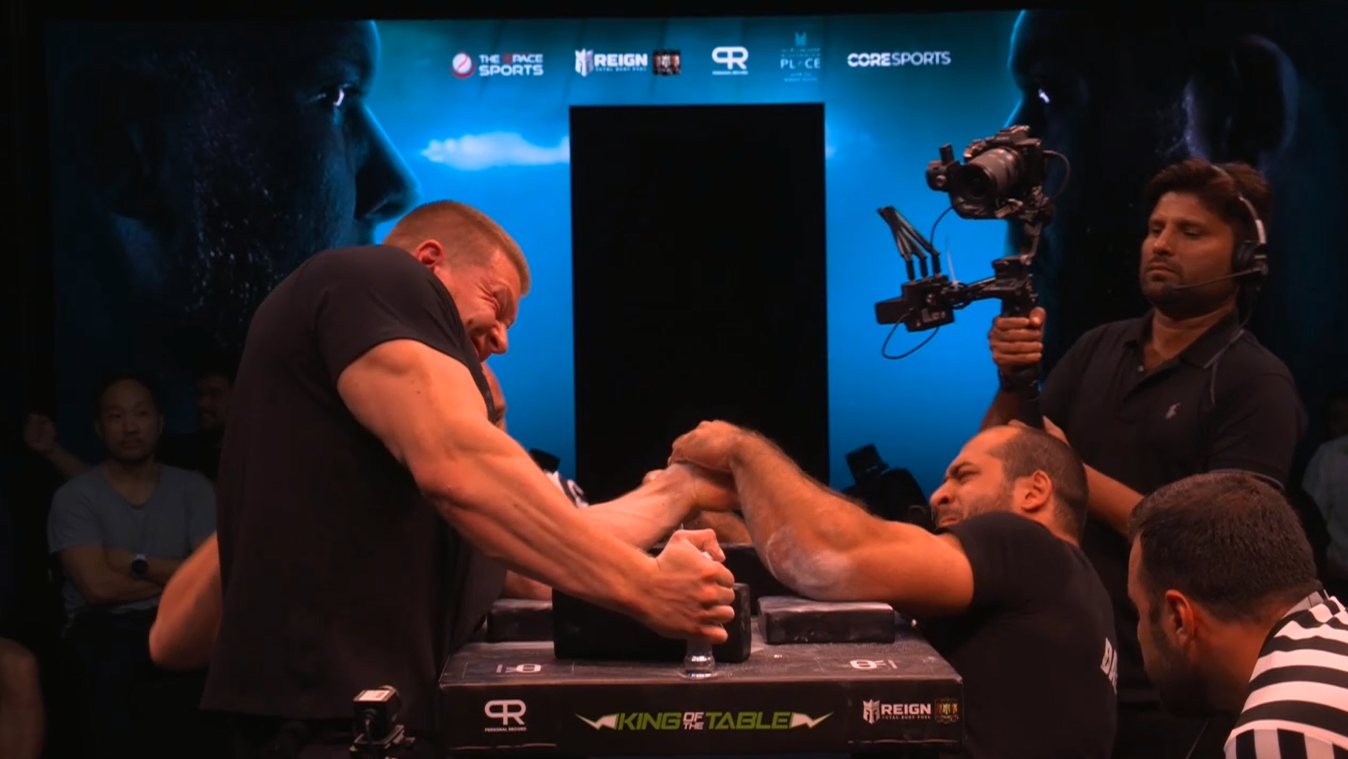 The Kazakhstani puller fought back in the fourth, taking the round into the straps. Dadikyan was slapped with a foul for moving while the straps came on. Morozov showed brilliant contain and almost scored his first pin but committed an elbow foul. Second foul for Dadikyan in the round, before Morozov made it 3-1 to get back in the match. The straps came on once again in round four, and after a spectacular contain, Morozov secured his second round to reduce the margin, and equalled the scores 3-3 in the final round. The match was supposed to head into the silver bullet, i.e., round seven, but due to Dadikyan’s injury, Morozov was awarded the win.

Khaled returned for the second time in the event, taking on Ryan Bowen this time. The match started off with a shocker, as Bowen made a surprise pin on Khaled to take a quick lead. The second round saw a lengthy contain from both, before Bowen and Khaled committed two and one elbow fouls respectively, but the Aussie took the second round as well. The scores became 3-0 as Bowen scooped up round three as well. With just one pin away from win, Bowen engaged King’s Move in round four and secured the victory over Khaled. 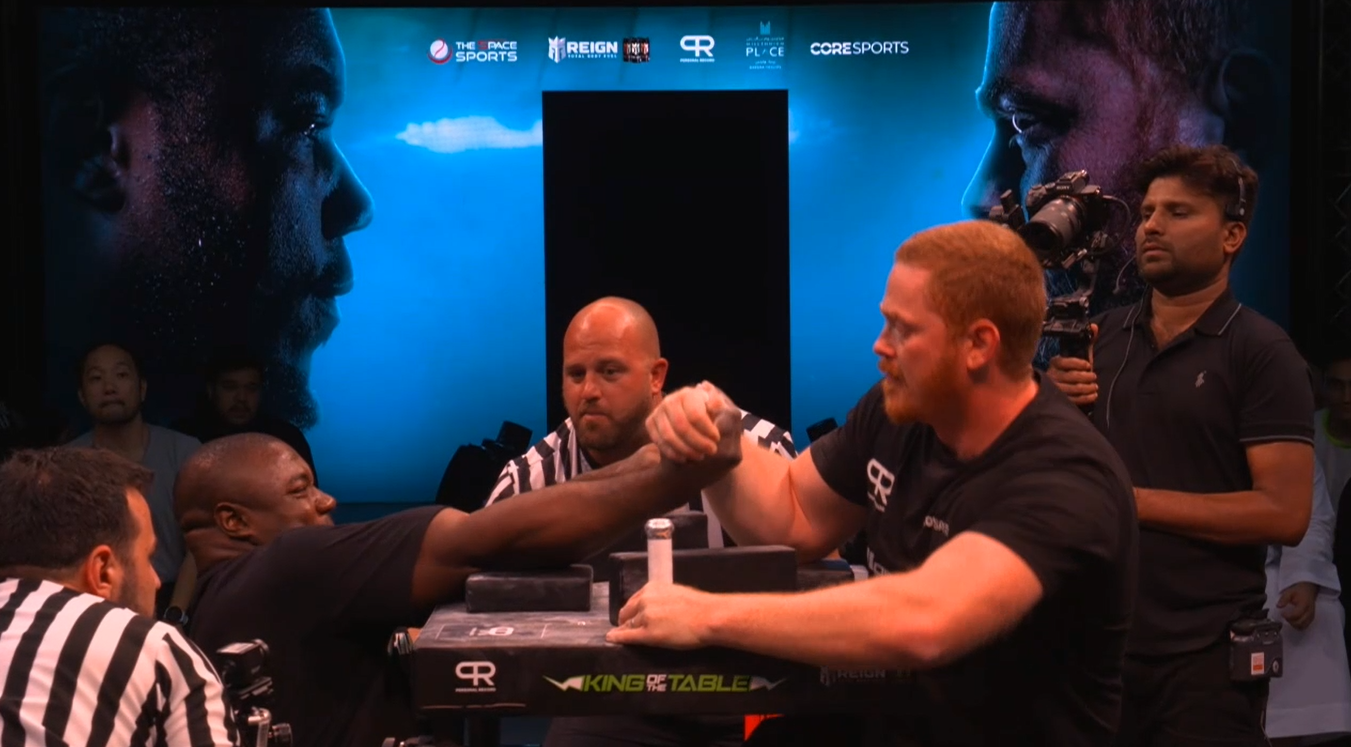 Straps came on right from the start, and it was Chaffee who embarked on the lead. The second round, with the straps once again, saw fouls from both pullers each. The contain that followed, resulted in Chaffee increasing his lead to 2-0. 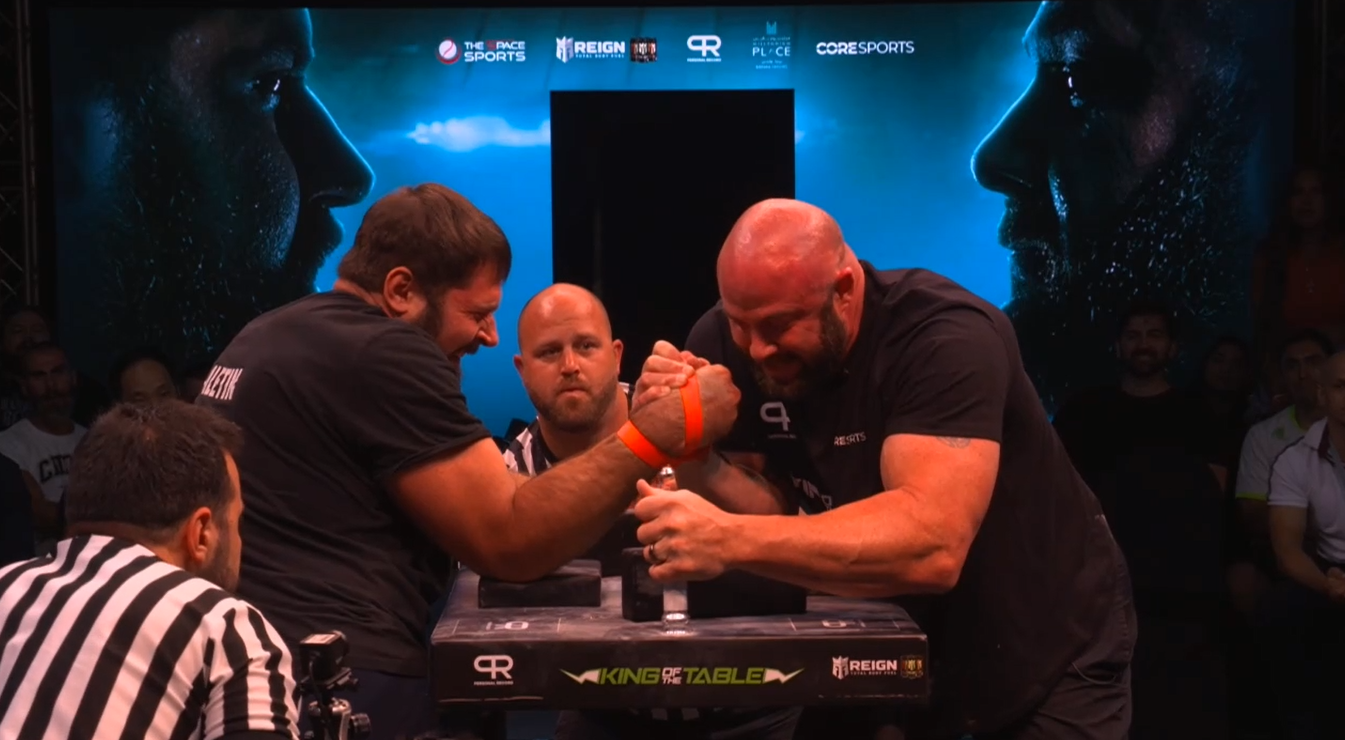 Laletin bounced back in round three, pinning Chaffee after the American was slapped with a foul. The Russian evened the odds with his second pin of the match, with the high-tension clash now at 2-2. The straps were put in place for the fifth round as well, with both pullers carrying two fouls each. Laletin still managed to pin for a third time to be on a 3-2 lead.

The sixth and final round, with the straps on, almost had Chaffee scoring the pin, but an elbow foul from Laletin ended the contain. The same scenario repeated once again, with Laletin now carrying two elbow fouls. However, third time was the charm and Chaffee finally made the pin, making it 3-3 and the main event went into the silver bullet.

The seventh round had the straps on as expected and after a brilliant contain from Laletin, it was Chaffee who made the winning pull, securing a 4-3 win to seal off the main event.

King of the Table 5 FULL RESULT