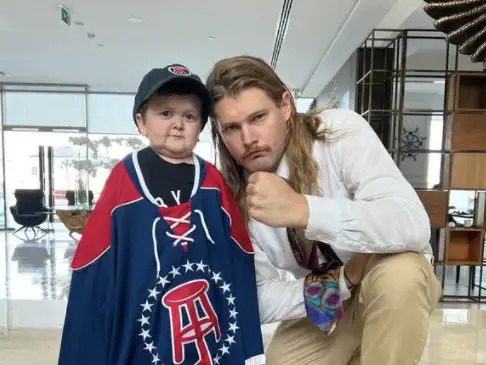 Hasbulla Magomedov, also known as mini-Khabib, is a social media influencer with almost two million followers. The popular internet celebrity did not mince his words while talking about one of the greatest footballers, Cristiano Ronaldo.

The Portuguese star plays for Manchester United and has established himself as one of the greatest ever to play the sport after his exploits over the years. Ronaldo is also the most followed person on Instagram, with over 300 million followers.

Hasbulla is not the biggest fan of Ronaldo

However, Hasbulla did not see the hype behind Ronaldo. He feels that there is no chance that the footballer is more popular than him across the globe. The 18-year-old said in an interview with Barstool Sports:

“I could not care less about Ronaldo. I am more famous than him. The only thing he does in a match is pass around the ball.”

While Ronaldo does not have the appreciation of Hasbulla, the five-time Champions League winner is adored by the rest of the UFC, Sports, and the internet fraternity.

Khabib Nurmagomedov, who shares a close bond with Hasbulla, is an ardent fan of Cristiano Ronaldo as well as Manchester United. The former UFC star even visited Old Trafford last year during the Red Devils’ match against Everton.

Hasbulla’s rival Abdu Rosik has also made his presence felt at Old Trafford. The Tajikistani singer was seen hanging out with the likes of Ronaldo and Paul Pogba. The TikTok star had an altercation with Rozik at the UFC 267 event.

Ronaldo completed a fairy-tale come back to the Premier League giants at the start of the season. Despite the arrival of the veteran, along with the likes of Raphael Varane and Jadon Sancho, Manchester United have been struggling this season. After being knocked out of all the competitions, the club only have a Champions League spot to play for, a battle which is a steep climb.

After helping Portugal qualify for the 2022 World Cup in Qatar with wins over Turkey and North Macedonia during the International break, Ronaldo missed Manchester United’s 1-1 draw against Leicester City at Old Trafford.

Previous articleKing Of The Table 3 Full Results: Dave Chaffee outclasses Alex Kurdecha to a 5-1 victory
Next articleHasbulla Magomedov says he wants to become Minister of Internal Affairs for Dagestan