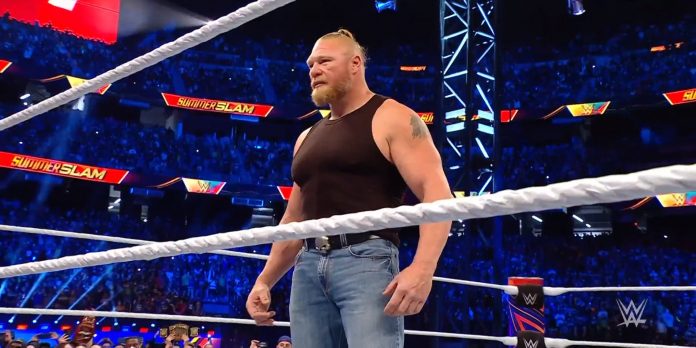 The former WWE Universal Champion Brock Lesnar made his shocking return at WWE SummerSlam, which has been a show of several surprises.

Roman Reigns and John Cena had a brutal battle in the main event of SummerSlam. All the hype and build-up led to the epic showdown between two of the greatest stars of the company.

Reigns had raised the stakes of the match as he had stated that if he had lost the match then he would leave WWE. But, that did not happen as John Cena could not dethrone ‘The Tribal Chief’ and fell another victim to the WWE Universal Champion.

After keeping the fans to the edge of the seats and multiple near pinfalls, it was Roman Reigns who left Allegiant Stadium as the WWE Universal Champion.

But just when everyone thought the night was over, in came ‘The Beast’ Brock Lesnar to a great reception from the Las Vegas crowd. He marched down the ramp and entered the ring to have an epic staredown with the WWE Universal Champion Roman Reigns.

It is not unknown that Lesnar and Cena were involved in a fierce rivalry in the past. After the show went off-air, ‘The Beast’ sent John Cena to ‘Suplex City’. Video clips started circulating Lesnar attacking Cena with Suplex.

It is to be noted that Heyman is currently ‘The Special Counsel’ to Roman Reigns. But, earlier he was the on-screen advocate of Brock Lesnar.

Earlier in the night, it was Becky Lynch, who made her much-awaited return to the company. She went on to challenge Bianca Belair for the WWE SmackDown Women’s Championship and captured the title.