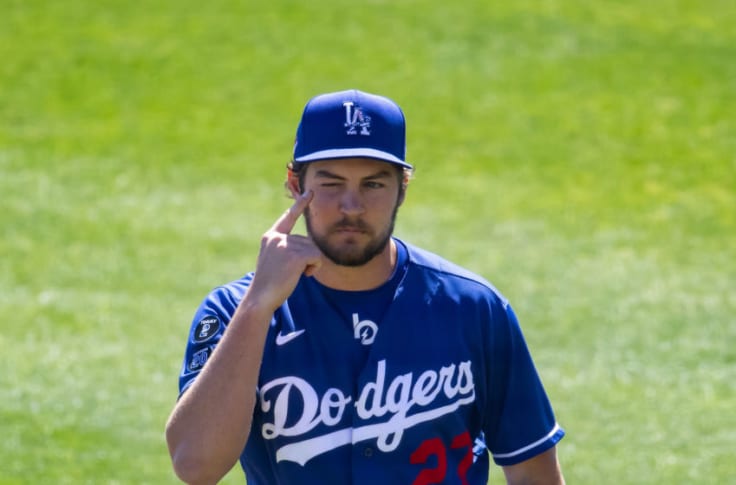 Fernando Tatis Jr displayed his touch of daring-doo as he took a cheeky shot at Trevor Bauer after hitting each of his two home runs during the Saturday night clash between Los Angeles Dodgers San Diego Padres.

After hitting his first home run, Tatis Jr covered up one of his eyes as he was rounding the bases. This may look as just some hilarious or unique way of celebration to many but to the prying eyes of the MLB fans, Tatis Jr was mimicking Bauer.

Back in early March, Bauer did the same thing during the Dodgers’ spring training faceoff against the Padres, as the pitcher threw the entire first inning with one eye closed.

However, the mockery did not just end there. After his second home run in the 6th inning, Tatis Jr performed the wavy-arms strut near home plate, another troll act on Bauer who sometimes uses the same celebration which in turn is a throwback to UFC star Conor McGregor as well as WWE CEO Vince McMahon.

After the match, Bauer was reached out to record his reaction to the double troll by Tatis Jr, to which, the 30-year-old had a sporting reaction.

“I’m all for it and it’s important that the game moves in that direction and we stop throwing at people because they celebrated having some success on the field.”

“We have a history together, we’ve played against each other for many years. That’s what it is to be a competitor. I’m going to go at you and I’m going to get you sometimes and you’re going to get me sometimes. We can have fun and we can celebrate it while we’re still competing at the highest level. I just thought that was an important note tonight,” Bauer added.

Trevor Bauer’s words hold true for his love of the game as well as the banters and mockeries that come as part of it, as the Dodgers stalwart himself has a history of trolling opposition fans and a famous example of the same was recorded during the Game 3 of the Dodgers’ ALCS clash against Toronto Blue Jays back in October 2016.