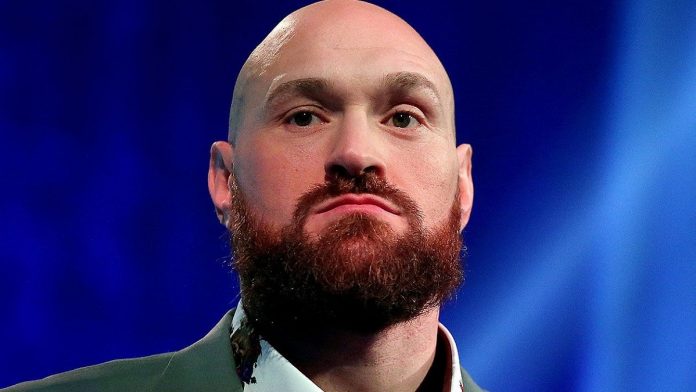 WWE WrestleMania Backlash recently took place on Sunday night and one of the notable stars backstage at the event was none other than WBC Heavyweight Champion Tyson Fury.

The British boxer Tyson Fury and his son made their presence felt backstage at WrestleMania Backlash. It is needless to say that The Gypsy King and WWE share strong ties. Fury has been associated with the company since 2019 and also made his pro-wrestling debut at the WWE Crown Jewel pay-per-view that year.

WWE shared some exclusive backstage photos from WrestleMania Backlash on their Twitter handle. The pictures saw Tyson Fury and his son posing with the likes of Rey Mysterio and WWE CEO Vince McMahon.

As mentioned earlier, Fury had his in-ring debut in WWE against Braun Strowman when he won the contest by count-out at Crown Jewel. It was reported that Fury had earned £11.9 million ($14 million) for his participation.

Fury had also made an appearance on the 8 November 2019 edition of Smackdown at the Manchester Arena when he shaking hands with Strowman and joined forces to go head to head with the B-Team (Bo Dallas and Curtis Axel) and defeated them.

As it turns out his opponent upon his return could be the former WWE Champion Drew McIntyre. They have been taking back and forth shots at each other on social media and teasing a huge bout. The Scottish Warrior had even teased a marquee match of Battle of Britain considering they both hail from the UK. There are huge chances of the match taking place down the line.

McIntyre recently spoke about the chances of the match being held. He said: “100 percent I see it happening. I’ve got a vision of how I’d like to see it happen. I don’t make the decisions. That’s for others to talk about behind closed doors. But I know somewhere like the UK it would be huge business.”

Tyson King is set to collide with Anthony Joshua on August 14 this year in Saudi Arabia. The fans are eagerly waiting for The Gypsy King to step foot inside the squared circle once again.