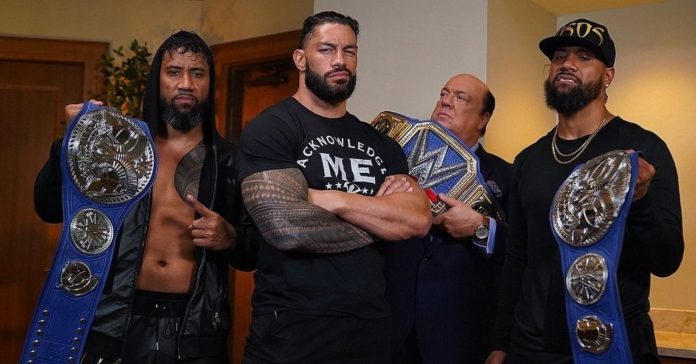 WWE Universal Champion Roman Reigns has formed The Bloodline stable which has been dominant alongside his cousins, The Usos(Jimmy and Jey Uso), having Paul Heyman in their corner as well. Now, it seems, the stable is set to get some new members on board.

Roman Reigns could soon add Naomi to The Bloodline

Paul Heyman, ‘Special Counsel’ to Roman Reigns, recently in an interview with the New York Post dropped some hints about the addition of WWE SmackDown star Naomi to The Bloodline. The WWE fans have been longing to see Naomi being added to The Bloodline for a long time. Naomi has not been at the top recently and fans want her career to be reinstated by joining the faction.

Paul Heyman gave a detailed answer when asked about the possibility of Naomi joining The Bloodline. Heyman also indicated that Naomi could already be a part of the group as Roman Reigns might have kept tabs on her.

He said: “At the moment I think we are addressing the enormous box office attractions that are now coming back seemingly all the time against the Tribal Chief and the fact that The Usos, who are reigning defending SmackDown tag team champions, are being pushed to the limit by the best tag team to come along besides The Usos in the past 20 years, the Street Profits.”

What could be next for Naomi?

Naomi has not been featured in the matches and when she had approached WWE Official Sonya Deville, she has been ignored and this could lead to the frustration. There could be some intriguing family storylines as well in the future. Naomi, being Jimmy Uso’s wife would be an apt member of the stable.

They could even feud with The Street Profits and Naomi pursuing the Bianca Belair for the SmackDown Women’s Championship would be an important move for her career. It is to be also noted that Belair is the wife of Montez Ford. So we could certainly witness a family feud soon.