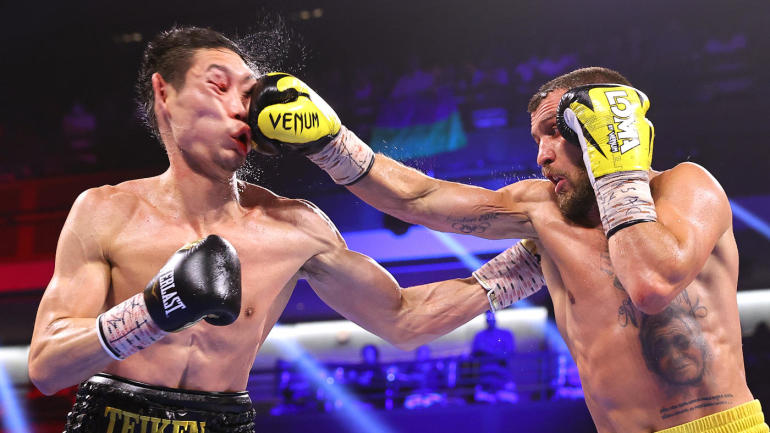 Former WBA (Super) and WBO lightweight champion Vasyl Lomachenko returned to the squared circle after a hiatus of eight months to thrash Japanese boxer Masayoshi Nakatani with a 9th round TKO.

Since losing his lightweight belts against Teofimo Lopez last October and failing to land a rematch, Lomachenko wanted to mark a spectacular comeback against Nakatani and the boxing fandom saw the same at the Virgin Hotels Las Vegas in Paradise, Nevada, on 26th June.

Nakatani, who clinched the vacant WBO Inter-Continental lightweight title back in December last year against Félix Verdejo, has also suffered a loss to Lopez, but the Jap is still considered to have given Lopez the toughest fight of his career.

However, things were different this Saturday in Las Vegas. Even though Nakatani picked up the pace in the early rounds as Loma was trying to find his rhythm, the Ukrainian took the helm of the match, starting with a vicious 5th round blow that dropped Nakatani.

Despite his opponent having a four-inch height advantage, Loma started to put his left hand into damaging work, while Nakatani, who had suffered a broken orbital bone in his previous bouts, showed swelling around his right eye into the sixth and seventh round.

By the 9th round, Nakatani’s eye was almost swollen shut by Loma’s repeated blows and two back to back left jabs got the Jap into wobbling legs, forcing the referee to jump in and call a stoppage.

Having awarded a win by TKO, Loma went back to his desire of a Lopez rematch in his post fight interview, and is ready to face “The Takeover” into early 2022 as well.

“Everybody saw how I won and everybody has been waiting for the rematch,” said Lomachenko, “So, let’s make the rematch. … I understand he has a fight in the future. But after. How about after? Next year at the beginning of the year. December. January. February. I’m waiting.”