John Cena, the wrestler-turned actor was recently revealed to be the host of popular show, Wipeout Reboot. But, an unfortunate mishap has stunned everyone. A contestant had passed away on the set in Santa Clarita, California, after completing an obstacle course.

John Cena is the host of Wipeout Reboot

On Wipeout Reboot, hosted by WWE star, John Cena and comedian, Nicole Byer, a male participant in his 30s breathed his last on Wednesday.

The shocking news was first broken out by TMZ. As per the reports by them, the police had received a cardiac arrest call on the day mentioned above.

The participant had completed the obstacle course. Following that, he had complained to the paramedic about having chest pains. He was immediately taken to the local hospital but he was declared dead.

Questions might arise about maintaining safety protocols and measures of the show. But, TMZ reported that the contestants always undergo several medical tests prior to competing on the show.

Following the disheartening incident, TBS told TMZ: “We are devastated to have learned of his passing and our deepest sympathy goes out to the family.”

Endemol Shine North American, the production company for Wipeout, said: “We offer our heartfelt condolences to the family and our thoughts are with them at this time.” 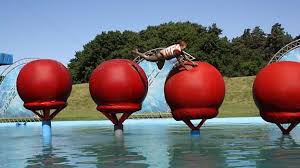 The show has stopped its production on Thursday and Friday. They have decided to take a week off following the tragic incident.

Wipeout originally had quite a run from 2008 to 2014 on ABC. It was rebooted and the show made its return. John Cena was announced as the host of the show with Nicole Byer back in September. The former WWE Champion is also the Executive Producer of the show.

John Cena has recently become a part-timer in WWE, focussing mainly on his projects apart from wrestling. He had embarked on a journey in Hollywood.

He made his last appearance on the second night of WrestleMania 36. He had faced Bray Wyatt in a cinematic Firefly Funhouse Match in a losing effort. Currently, he is set to feature in Suicide Squad movie and Fast and Furious 9.

Keith Lee opens up on his WWE absence

Bianca Belair looks to defeat all members of The Four Horsewomen