The prodigal son returns:Ivan Rakitic set to complete a shock move back to Sevilla 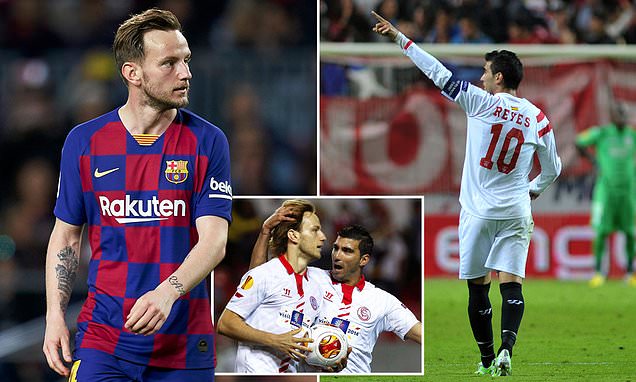 After months of negotiations and rumors, the out of favor Barcelona star Ivan Rakitic is set to complete a move back to his former club Sevilla.

Barcelona has just completed one of their worst seasons in the recent history and the new manager Ronald Koeman is looking to complete a major overhaul in the squad. Rakitic had been a part of a tug of war between Tottenham Hotspurs and Sevilla with the latter finally succeeding to secure the veteran’s services.

With Messi looking to move out, Suarez no longer a part of Koeman’s plans, and now Rakitic too moving out, Barcelona sure looks to have an extremely interesting lineup for the coming season.

Rakitic is back home-

The reports of the transfer first emerged from Spanish outlet Marca and the Croatian star is currently having a  medical at Sevilla. Should all go as planned, Rakitic will sign a three-year contract with Sevilla.

Rakitic had been out of favor in Barcelona during the past season and was a starter in less than half the fixtures. With, the experienced midfielder now on the wrong side of 30 and not in the best of touches, his stay at Barca wasn’t going to be very pleasant given Koeman has his eyes on fielding a young side for the 2020/21 season.

The 32-year-old was back at Barcelona for PCR testing on Sunday, but it seems like he won’t start pre-season with the club later today as he finalizes his move.

Sevilla won’t pay a fee for Rakitic, who is in the final year of his contract, but the move does mean Barcelona can get one of their big earners off the wage bill.

Ivan Rakitic is back to Sevilla! Done deal and total agreement reached with Barcelona. He’s gonna sign for next three years. the Croatian midfielder is also having medical tests right now (as reported by @marca). Here-we-go 🤝 #FCB #Sevilla #Barcelona #Rakitic

Rakitic had joined from Sevilla in 2014 and had scored 35 goals along with providing 42 assists in more than 300 appearances for the Catalan giants. He was a vital cog of Luis Enrique’s treble-winning side and had surely seen much better days at Camp Nou upon his arrival than during his departure.

Barca fans expectedly took to twitter to wish him luck and thank him for his contributions in the Blaugrana jersey.

You will never be forgotten #Rakitic pic.twitter.com/0rxJCMWFvN

#Rakitic End of an Era pic.twitter.com/EL07JYJ1sB

Long haired, brave hearted midfielder stepped on Camp Nou in 2015. Perfectly blended in the Xavi rotation and kept the balance.

Scapegoated, but always fought like a warrior. You'll always be our Goku.

In other news for the Catalan giants, the tussle between Messi and Barcelona is taking a turn for the worse as the Argentine superstar is adamant for a move out of Camp Nou.

While the Argentine believes that he is eligible to leave Catalans on a free transfer, Barca are reportedly asking a humongous £626million for him, something that even Man City would find impossible to cough up.

However, the entire Messi transfer at this moment remains more of a matter of “when” and not “if” and the Catalans are sure to enter a new, if a somewhat tumultuous era under Koeman, once their legends look to complete their swan songs elsewhere.

A new messiah?: Braithwaite wants Blaugrana No.10 should Messi leave

BarSELLona?: What next for the battered and bruised Barcelona?