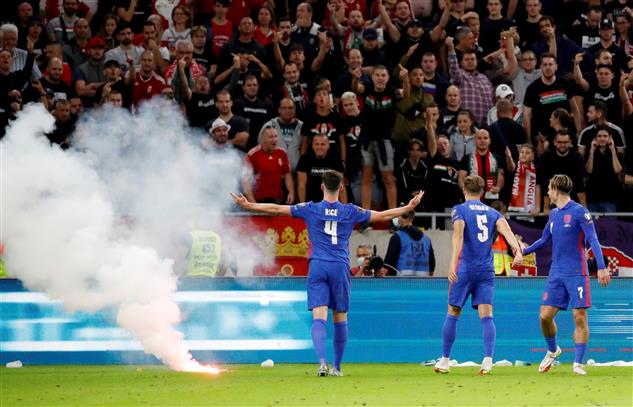 FIFA, the international football governing body has banned and fined Hungary for using racial slurs during a World Cup qualifying match between Hungary and England that was held earlier this month.

England dominated the field and handed a crushing blow to Hungary, who lost 4-0. The Hungarian supports made racist comments and attacked the England players, specifically Jude Bellingham and Raheen Sterling with monkey chants.

The issue was investigated by FIFA who decided to fine Hungary £158,416. The governing body also came to a decision to ban two stadium matches at home for the spectators. Matches will be played behind closed doors with no audience. One of the matches is to be suspended for two years.

“After analysing and taking into consideration all the circumstances of the case, specifically the seriousness of the incidents (racist words and actions, throwing of objects, lighting of fireworks, blocked stairways), the Committee decided that the MLSZ would play its next two home matches in FIFA competitions without spectators, the second match being suspended for a probationary period of two years.”

“The FIFA Disciplinary Committee has imposed a ban and a substantial fine on the Hungarian Football Federation (MLSZ) in relation to the racist behaviour of numerous supporters during the FIFA World Cup Qatar 2022 qualifying match between Hungary and England on 2 September 2021.”

“FIFA’s position remains firm and resolute in rejecting any form of racism and violence as well as any other form of discrimination or abuse. FIFA takes a clear zero tolerance stance against such abhorrent behaviour in football.”

This is not the first time that FIFA had to take such drastic measures to tackle the issue. At the Euro 2020 event that took place in Budapest, Hungarian supporters committed racist abuse and they took it up a notch by displaying homophobic banners at the stadium. Spectators were again banned for the three UEFA games that was to be held at Hungary. Again, the third match was suspended for two years but Hungary disobeyed FIFA again and the match was played in a full capacity stadium.

Rob Dorsett, a journalist, confirmed the crowd making monkey chants whenever Raheem made a move.