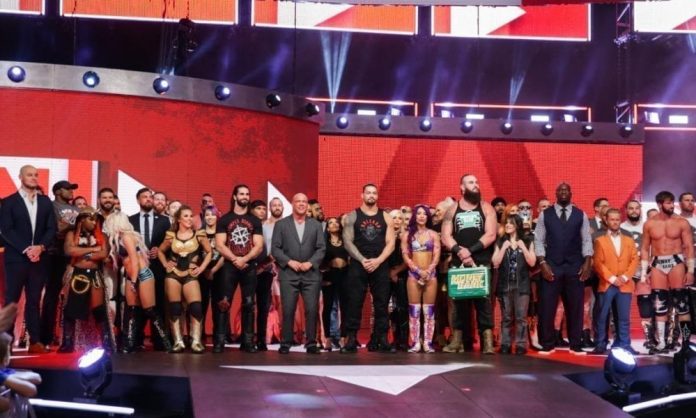 WWE has a wide range of superstars in their promotion existing over their three brands- the main rosters, Monday Night Raw and Friday Night SmackDown, and the developmental territory of NXT. Reportedly, the creative team of WWE has listed some stars who are worthy of push and are being underutilized.

WWE has a plethora of talents in their promotion and it is evident that many deserving talents have failed to get the opportunity of a push. It is not possible for each and every talent to reach the mid or upper card simultaneously and the quantity of the stars have increased.

Now as reported by WrestleVotes, WWE writers have collectively listed some talents who might be pushed in the future and could be successful. It turns out that the stars who were picked were Cesaro, Angel Garza, Chad Gable, Carmella & Peyton Royce.

WrestleVotes reported that “Recently a group of writers was asked to make a list of underutilized talents they felt could shine if given the proper opportunity. Those lists ranged wide, but nearly ALL of them included: Cesaro, Angel Garza, Chad Gable, Carmella & Peyton Royce.”

Current status of the chosen stars on the roster

It is not a surprise to see Cesaro on the list as he is immensely talented in-ring performer and has worked hard over the years. The former WWE United States Champion was speculated to get a push in the past but that did not happen.

He was paired with Paul Heyman previously but failed to reach the top-tier of the company and remained as a mid-carder. However, the Swiss Cyborg shone in the tag-team division Currently, he is teamed up with Shinsuke Nakamura performing on the blue brand.

Another name that has popped up was of Angel Garza, the former Cruiserweight Champion who is currently teasing a storyline involving mystery woman on the red brand.

Chad Gable’s name was included as well whose Shorty G gimmick failed to impress and is likely to form a tag-team with Otis.

Speaking of the women’s division, Carmella was in the list who recently got a gimmick change and is being pushed to challenge Sasha Banks for SmackDown Women’s Championship, whereas Peyton Royce, the former Women’s tag-team champion could be seeing herself in a better position as well.

It is to be seen how Vince McMahon handles the situation.

If you like reading about MMA, make sure you check out MMAIndia.com–