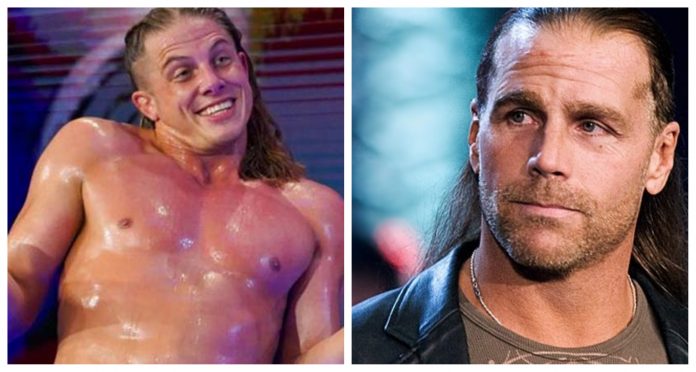 WWE star Riddle recently took to his social media account and posted a hilarious photoshopped image of Shawn Michaels that would certainly tickle the WWE fans by providing a hint of nostalgia of the 90s as well.

Riddle recently took to his Twitter account and posted the classic but controversial Shawn Michaels picture from the 90s. The image features a partially-nude HBK in the background, with the clearly-photoshopped face of Riddle replacing the face of Shawn Michaels’ face. It also featured the WWE United States Championship covering below HBK’s waist.
The Original Bro captioned the image with, “The future looks bright for the United States Championship and I couldn’t be happier bro #Stallion #HBK #WWERaw #EliminationChamber #FutureChamp”

The original photo featuring the former DX member was taken from a photoshoot Shawn Michaels took part in for Playgirl Magazine, back in 1996. Back then he was the reigning WWF Champion. The company then had the tendency to showcase controversial content in the late nineties.

The iconic pose was also recreated by current WWE Champion Drew McIntyre on Monday Night Raw when he won the WWE title for the first time at WrestleMania 36.

Riddle has a very casual and cool approach towards his gimmick and respected to that, he has taken an unique way to hype the upcoming triple threat match for the United States Title against Bobby Lashley and Keith Lee, who recently returned to WWE programming.

Riddle is scheduled to square off against Keith Lee & Bobby Lashley at Elimination Chamber pay-per-view and it has been quite a storyline as the three have been heavily involved to get their hands on the United States title.

Riddle who was assaulted by Lashley on last week’s edition of Monday Night Raw and is on the verge of vengeance. The Almighty was disqualified after he did not release his Hurt Lock submission during the match.

On latest episode of Monday Night Raw, Lashley would again lay his hands on both Keith Lee and Riddle as the latter two were involved in a match. The Limitless One had won the match but become the victim of the attack as well. It is to be seen who leaves Elimination Chamber as the US title winner.