King of the Table 4: Everything you need to know about Devon Larratt vs Levan Saginashvili Match-up

We’re into the month of June and are just a few days away from witnessing the biggest, most anticipated match in the history of arm wrestling- as Devon Larratt and Levan Saginashvili, two of the greatest, biggest, and strongest arm wrestlers ever, lock horns in the main event of the 4th edition of the prestigious King of the Table 4 event, taking place in DUbai on 25th June.

Even before the two arm wrestlers were slated to face off one another on the table, a rivalry between Devon Larratt and Levan Saginashvili was already cooking up. On one hand, we have Devon aka “No Limits”- the most famous arm wrestler of our time and the Canadian puller has had tremendous success on the table. On the other hand, we have Levan Saginashvili- the most feared and revered arm wrestler on the European circuit. With his raw, sheer strength and size, Levan has earned a fitting nickname, “The Georgian Hulk”. 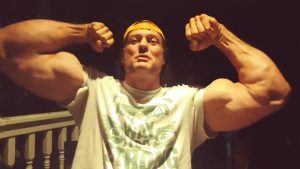 Arm wrestling fans have been wanting to see the super match for years and after three back-to-back successful editions of the coveted King of the Table event series, the fourth edition is finally making that wish a reality- as Devon and Levan headline the biggest arm wrestling event of 2022.

Devon vs Levan Time | King of the Table 4 Time

King of the Table 4 Date

The matches will take place on 25th June.

Devon Larratt vs Levan Saginashvili has a shutout stake. As the underdog, Devon just needs to win just a single round for his stakeholders to win the bet. On the other hand, the betting favorite Levan must remain undefeated throughout the six rounds and clinch a 6-0 sweep for his Stakeholders to get the victory.

Head over to Armbet to bet on Devon Larratt and Levan Saginashvili.

How to Watch Devon VS Levan | King of the Table 4: How to watch | PPV

The King of the Table 4 event will be live on Coresports PPV for $12.99

Previous articleLet’s Do It: Artur Beterbiev calls out Dmitry Bivol for undisputed 175lbs title following Joe Smith Jr knockout
Next articleWhat Are the Best Sports to Bet on in Ohio?