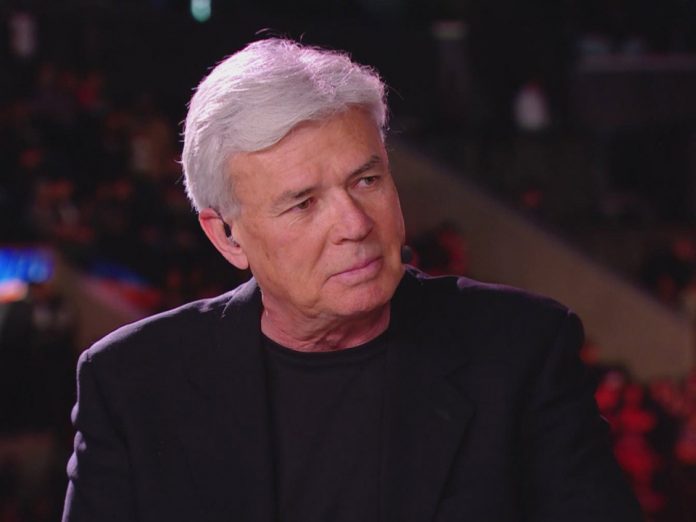 Eric Bischoff, the WCW and WWE legend has been announced has the latest inductee of the WWE Hall of Fame. He will be a part of the Class of 2021, alongside Molly Holly, as well as the Class of 2020 which is set to take place next month.

Eric Bischoff was surprised with the announcement

This week’s edition of After The Bell podcast hosted by SmackDown commentator Corey Graves saw Eric Bischoff as his guest. Graves went on to make the announcement to Bischoff and he was quite surprised with it. He became emotional and was thankful at the same time.

He said: “Wow! Thank you. I don’t know quite what to say. Wow. It’s awesome. It’ll take a few minutes. Wow – it’s all I got. For a guy that won’t shut the hell up on his own podcast, I don’t have anything to say, I’m just speechless. Wow. This is going to take a minute.”

He added: “This is just… I’m not going to lie to you because every year around this time I get e-mails and social media asking, I’ve always been pretty good about keeping it out of my mind. I don’t think about it, never have, to any real degree. But, you look at some of the names associated – many of the names, all of the names – with the WWE Hall of Fame. I’m going to personalize this one for me.”

The journey of Eric Bischoff in the wrestling industry:

Bischoff broke into the sports-entertainment industry in the late 1980s. He started hosting the AWA’s shows on ESPN and interviewing the legendary stars. He then made a great move which proved to be an important and historic one in his career.

He joined World Championship Wrestling(WCW) in 1991. He worked as the host of the shows and eventually started calling the action on WCW’s weekly television shows. In the mid-1990s, Bischoff became the executive producer of WCW.

He was one of the persons to help bring the legend Hulk Hogan to the company and also responsible for launching WCW Monday Nitro, the WWE Monday Night Raw’s rival.

Eric Bischoff has always been a controversial figure in wrestling industry and he has woked as General Manager. He had introduced the concepts of Raw Roulette and the Elimination Chamber.

He will enter the WWE Hall of Fame during the 2021 Induction Ceremony, which will take place on Tuesday, April 6, streaming exclusively on Peacock in the United States and on WWE Network in the rest of the world.