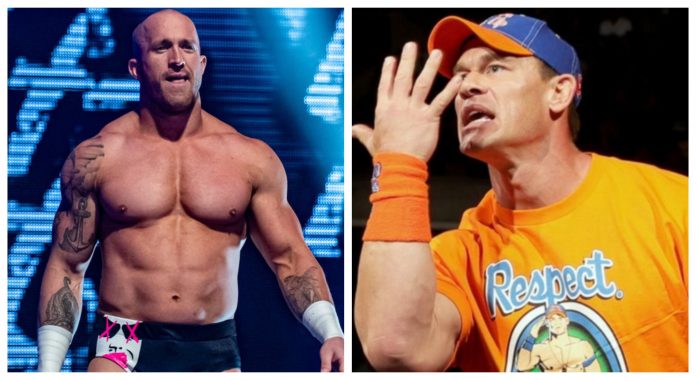 Mike Bennett, the former WWE star recently had an interview with Lucha Libre Online. He went on to speak about how he had done the famous gesture of John Cena’s “You can’t see me” and later on the 16-time World Champion had strictly told him not to repeat it ever again.

During the interview, Mike Bennett recalled his involvement in a match against Cryme Tyme(JTG and Shad) Sunday Night Heat. JTG, who had the gold teeth,calling it the grill would take his fingers and flaunt his grill whenever he would hit a great move. Bennett spoke about a spot where he would do similar to what JTG would do and mimic his gesture.

But, it seemed like Bennett was doing the gesture of John Cena’s “You can’t see me” and someone had informed the former WWE Champion about the incident. He then revealed how Cena had reacted to him at the backstage.

He said: “So when I got to the back, on my very first match, John Cena was there to inform me that I should not be doing this (You can’t see me) in any way, shape or form. It was put to me not so nicely. Which is funny because after I got to go (to WWE), when I went back to WWE, I never got to tell him that story which I wanted to. I actually really enjoyed seeing him when I went back.”

During the interview, Bennett spoke highly of John Cena but he understands why he was being protective of his gimmick, because it’s his ‘money-maker’ and anyone apart from Cena would have also reacted the same way he did.

Mike Bennett said: “He was a very down-to-earth and a very cool guy. I really enjoyed interacting with him. He was super helpful with everything. But I think at that time, I don’t blame him.”

John Cena is set to star in Fast 9 and he is working on other projects as well. He’ll also be the Peacemaker in the upcoming Suicide Squad sequel, and he’s currently filming a HBO Max spin-off series in Canada for the character.