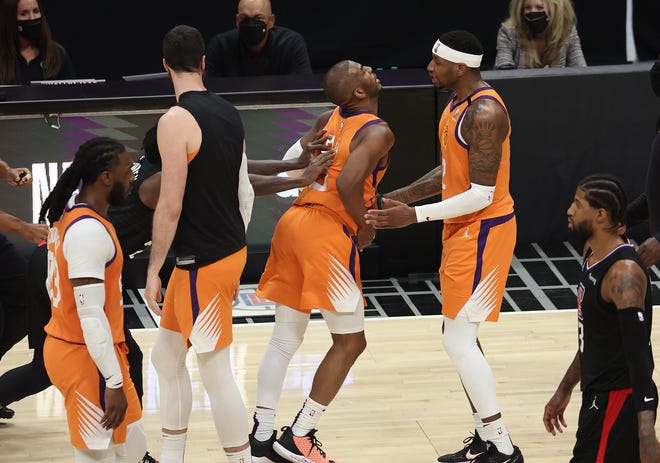 Phoenix Suns secured passage into the NBA Finals following a comfortable win over the Clippers in Game 6 of the Western Conference Finals. The blowout win, was, however, not without any incident as Pat Beverley was ejected late in the game for shoving Chris Paul on the court.

The incident occurred during a timeout in the contest without just under six minutes left. As the team called time-out following a deep-three from Chris Paul that increased the gap to 26-points, the players proceeded to make their way to their respective benches.

After making the three, which was Paul’s sixth of the night, he appeared to exchange some words with Beverley.

While making his way to the sidelines, a frustrated Pat Beverley proceeded to shove Chris Paul to the ground. The player’s action generated a huddle and he was subsequently handed a technical foul. He was ejected from the game and ended with 11 points, 3 assists and 1 rebound after just over half an hour on the court. Watch the video right below:

The severity of the foul will most likely lead to a fine for Beverley as well as a suspension which will be enforced at the start of the next season.

Season ends for Pat Beverley and co. as Chris Paul makes it to the final for the first time

Chris Paul stepped up in the vital game to avoid a Game 7 and came out with 41-points in the victory. The 36-year-old will now make his first NBA Finals appearance in his long career.

“It sounds damn good. Damn good. It’s been a lot of work — a lot of work. Damn, that feels good. … I don’t know man, it’s just a lot of emotions.” Paul said after the game

Apart from Paul, it was a historic night for the Suns too as they secured their first NBA Finals berth since 1993. Back then, the Charles Barkley led side were ousted 4-2 by Chicago Bulls as they completed their first three-peat.