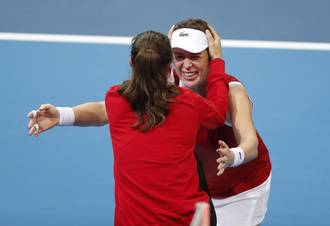 Russia’s Anastasia Pavlyuchenkova handed a defeat to France’s Aliza Cornet to progress to the semi-finals of the Billie Jean Cup. The Russian Tennis Federation had not made it to the event since 2015, but thanks to the efforts of Anastasia, the nation might have a chance to lift the trophy this year. The Russians had won the match against Canada on Tuesday 3-0 and they needed to win just one match on Wednesday to seal their fate.

Ekaterina Alexandrova was up against Clara Burel in the first round, but Ekaterina did not last long. Anastasia entered next and proved to be too good for Cornet. While the French did do her best in the opening set, 12th rank Russian came in with more power in the later rounds to win the game 5-7, 6-4, 6-2. The game was over in just 23 minutes.

All the five Russian players held ranks within the world top 40. The tournament had a change of format recently. According to the new rules the 12 teams would be divided into four round-robin play. The winners will be taking part in the semifinals that is to be held on Friday and finals on Saturday.

2004 to 2008 was the golden time for the Russian team as the country won the former Fed Cup back to back. The former champions are to face Slovakia, Spain and 18-time winners United States of America. Currently, Slovakia is one leading and might be the one to win, but everything can change after Spain’s tie with United States.

Nick Kyrgios picks his goat among Nadal, Federer and Djokovic